Back in February, I pulled a Maureen Dowd and completely lost my f’ing mind on (legal) edibles in Denver, Colorado. (I emphasize ‘legal’ for my current employers and any future employers. Hi, guys.)

I believe this is how many stories begin when someone loses their shit on edibles.

“I didn’t feel anything so I started eating more…”

Instead, about 30 minutes into eating the cookies, my boyfriend proclaimed that the skunky-tasting treats were defective, so we decided to go for a second one. And then a half of a third.

And for another 30 minutes, nothing.

And then we met up with our friend Cameron at the beautiful and newly renovated Union Station in downtown Denver.

And then we sat down to have a drink at the Terminal Bar.

AND THEN I LOST MY FUCKING MIND.

When I say I lost my mind, I mean I thought my face was melting off. I thought I was that Nazi dude at the end of Raiders of the Los Ark after the spirits disco’d out of the ark.

I first noticed shit was going south when I couldn’t follow a word of what my boyfriend and friend were saying. It went from a perfectly lovely conversation about the state of independent cinema to people sounding like beached seals. Concentrating was difficult, and not standing up and shouting “SOMEONE TAKE ME TO THE HOSPITAL!!!!” was even more difficult, but I managed to shuffle my way to the bathroom so I could slap some cold water on my face.

It took me 37 years to walk to the bathroom.

Once there, looking in the mirror, I noticed that my eyes were as wide as pinky toenails, and I had a giant shit-eating grin on my face. WHY AM I SMILING?! I thought. I AM SLOWLY DECOMPOSING!

I shuffled back to our seat at the bar and played it cool. I held my finger under my chin and nodded intently after every four words that came out of Geoff and Cameron’s mouths. One…two…three….four, nod in agreement. One…two…three…four, nod in agreement. You can do this Lauren, I pep talked myself. But I couldn’t do it. It took every ounce of my being not to simultaneously barf laughter and fall to the ground. I got up one more time to go to the bathroom, and when I came back, I gave Geoff the universal sign for “I’M DYING!” At this point I had to admit to my party that I was high as Neptune. They, of course, could already tell, but they had no idea how bad off I was. It was only when I started walking like this cat that they could tell.

Geoff escorted me back to our car and then our hotel room, where I promptly plopped on the floor like a rag doll.

“God, I’m fucking ‘UNGRY!” I kept mumbling over and over as I stared at my unbelievably large hands. Geoff, who was still not feeling the effects of the edibles, jumped on a phone call with a filmmaker friend. At some point he saw me pawing the air and heard my faint cries of starvation. He walked over to the mini fridge and pulled out a leftover slice of pizza from the night before.

He hung the slice of pizza over my head and I ate it like a Goddamn dog, y’all. 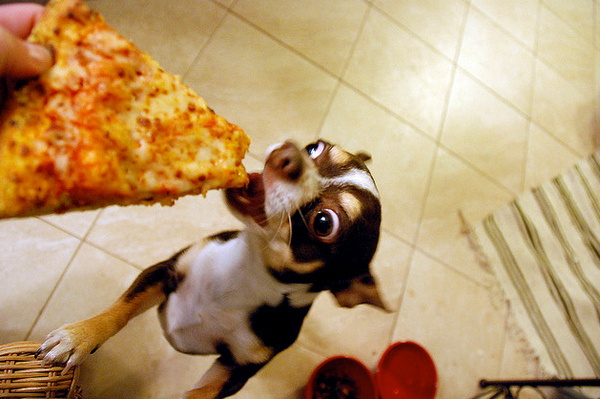 Seriously. I never tasted something so good in my life.

After I ate the pizza, I crawled into bed. Bed felt good. It felt warm and welcoming. But there was a gnawing sensation I just couldn’t shake: Geoff is going to jump off the hotel room balcony.

I watched Geoff pace the mezzanine as he talked to his friend, and I became convinced that at any moment he was going to hurl himself like a Muppet into the parking lot below. I whispered, “Geoff, don’t do it. Don’t jump,” but he couldn’t hear me. I drifted off into a deep, dreamless sleep. (Geoff didn’t jump.)

The next morning I was still high.

I stayed that way until midday, and my brain stayed relatively confused for a few days afterwards.

Geoff and I couldn’t bring ourselves to even look at the remaining cookies, and we flushed them down a toilet and then drove to a random downtown trash can to throw away the bag they came in.

Needless to say I have zero interest in eating the DEVIL’S CANDY ever again. Granted I did it wrong- I ate way too many- but it was still enough to scare the poop out of me. All kidding aside, we were pretty dumb. Edibles can be serious business for some, and they’re not to be taken lightly. End PSA.