My boyfriend is an animator which means his bookcases are filled with animator stuff.
One day I was bored and pulled down his copy of Persepolis.
I thought graphic novels were for kids and nerds, so I wasn’t expecting much from it.
Boy, was I a dumbass.

By the second page I was sucked into the book like James Spader into the Stargate. I was transfixed. A heartbreaking coming-of-age tale set during a time of historical significance had this history nerd gobbling up every word.   For those of you not familiar with Persepolis (and live a sad, sheltered life like I do), it is the autobiography of Marjane Satrapi, a young woman growing up in Iran in the 1970’s. The book takes us through her childhood, which intersects with the Iranian Revolution, her escape to Europe as a teenager, and then back to Iran as a twenty-something and the dramatic changes within her country.

Satrapi writes of a life that was once simple and carefree, how women didn’t have the adhere to strict Islamic dress code and men and women were allowed to interact socially without repercussions. She writes of the revolution, when a bomb lands on her neighbor’s house and kills everyone inside, how her parents sent her abroad for her safety, how she feared that her parents would be killed, how she came of age in a foreign country alone feeling ugly and disconnected. She writes of returning to Iran and the sad realization that the country she once loved was gone. Can you imagine handling such a dramatic change to your home? Where family members are killed for speaking their mind and childhood friends are forced into the military?

Persepolis gives a personal and relatable story to a culture that few of us understand. The graphics are simple black & white, but pack a lot of emotion. Originally part of a French four-part series, the entirety of Persepolis was published in 2003-2004 and was turned into a film in 2007. Satrapi’s other work includes Chicken with Plums. This book is a wonderful introduction to the graphic novel world and is a must-read for anyone. Grade: A 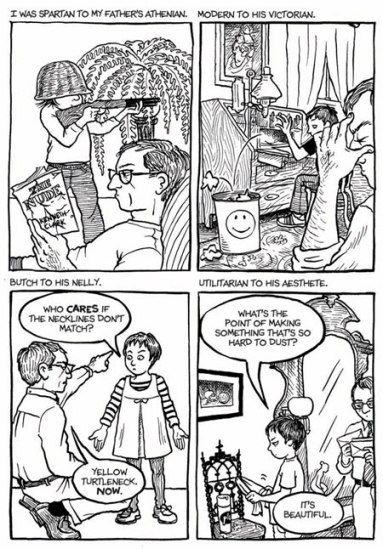 After I finished Persepolis, I couldn’t get enough of graphic novels. But not just any graphic novels- biographical ones. Next on my list was the much recommended Fun Home by Alison Bechdel.  Fun Home is the story of the author’s relationship with her angry and emotionally distant  father, the unveiling of his penchant for sleeping with young men, coming to terms with her own sexuality, and her father’s death by walking in front of a truck. Bruce Bechdel did not enjoy his family- he only interacted with the children by having them help clean is pristine Victorian home. He ruled his household with an iron fist without a hint of compassion.

The story is non-linear, aesthetically ornate, and filled with obscure adjectives and detailed literary references (Bechdel’s father was an English teacher/funeral director who had a massive library and related to many of the troubled characters in early 20th century literature). Fun Home is captivating because of the severe dysfunction of the Bechdel family; the Bechdel children grew up in a funeral home much like their father and their mother was indifferent to their father’s hostility. Six Feet Under came to mind while reading Fun Home. The author has a tendency to get carried away with her English skills, which often comes across as pretentious, but still makes for an fascinating and challenging read. At times you’re shocked by the nature of the content- a library in Missouri even banded the novel. Of all my graphic novel readings, it is still by far my favorite. Grade: A

Next up was Bottomless Bellybutton and Black Hole…

What is your favorite graphic novel?