I’m spending Halloween back home in Central New York. If I were a child, I would enjoy this. Being an adult, there are many places I’d rather be than a town of 19,000 in a cold northern city (though I’m super happy to see my family). I’m sad that I’m not spending Halloween with my boyfriend who calls Halloween his favorite holiday. As I mentioned in my previous post ‘My Boyfriend the Style Icon‘, my boyfriend has multiple closets filled with costumes. Every day is dress-up day to him, but October 31st is particularly special. However, right now he is sitting on the runway at JFK. Jetblue has told the passengers on his flight that it could be 3-4 hours before they leave due to maintenance issues. It appears that Jetblue likes to keep their passengers captive at JFK. Hopefully this will not spoil his Halloween. I may wander around my town tonight and see if anyone is around, but as I’ve gotten older I’ve sadly become more and more disconnected from my hometown. Due to knowing that I would not be celebrating Halloween in Austin, I decided not to get a costume this year, but managed to stumble upon the most disgustingly hipster costume piece at a vintage store in Burlington this weekend.

This should be the official mascot of Hipstercrite: Tentacle mustache. I did actually get to celebrate Halloween weekend with my boyfriend in Burlington, Vermont but managed to have the makings of an anxiety attack at a giant warehouse party that made me assess my tendencies of getting anxious in crowded settings. My boyfriend was showing his film at the Vermont Film Festival and we were invited to a gigantic Halloween party at a converted brewery on the other side of the tracks. At first I was excited about this because I love excellent examples of adaptive reuse, which after spending a few days in Burlington, I realized that that is something the city has a lot of. I also enjoy going to anything on “the other side of the tracks”. This party had all the makings of something I would enjoy- except for people. As I walked into the party I could instantly feel my insides dying. An empty smile formed across my face and I spent most of the party looking like a Stepford wife. Though my exterior seemed calm and cool, I was trying everything to keep myself from running out the door. Luckily there was a 4 foot eyeball and bloodied mannequins in the back room that held my interest for a few minutes.

I’m not always like this, but sometimes I am. My mother claims it’s “the Gemini” in me. I have a sneaking suspicion it may have more to do with being an only child. It could be greater than that and I simply just have some sort of social anxiety. Like my father, I can charm the pants off of a small group or one-on-one, but get me in a loud room full of people and I instantly panic.  At parties, events or festivals it is often difficult to have meaningful conversations with people which I dislike. I’ve always thought this, but my ability to handle large crowds has gotten worse as I’ve gotten older. Maybe that’s it! I’m just getting old! However, I look at all my peers who enjoy going out to live shows and parties and I wonder what is wrong with me. TELL ME WHAT IS WRONG WITH ME, WILL YOU?!

I tried everything to keep myself together at the party, but I had the awkward scenario of telling my boyfriend that I needed to sit in the car for a few minutes and that I please please PLEASE wanted him to just continue having fun at the party. Being the wonderful boyfriend that he is, he was concerned and said, “Oh no, we can go if you want to! I’m tired!” I reminded him that I never wanted to prevent him from doing what he wants to do, but that I definitely needed to break away for a bit. We comprised with me going to the car and he staying at the party for another 20 minutes. I still felt guilty afterwards but Geoff trully doesn’t give a shit. We went back to the hotel and watched scary movies. Thank God for boyfriends who understand social anxieties even when you don’t understand them.

Here are some pictures from our scramble to find a Hallween costume in Burlington. 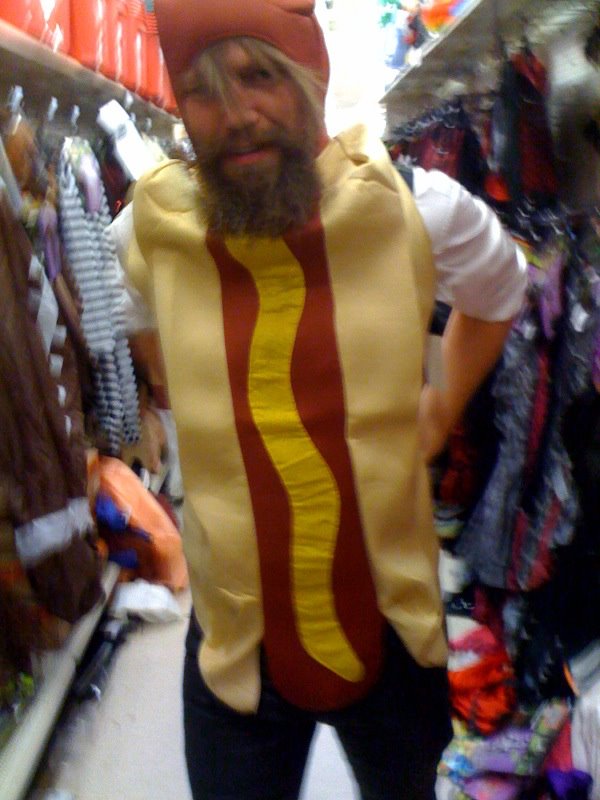 Yes, Geoff did buy this baby costume and wear it around on his head most of the night. An octopus mustache, a Jack Tussell Terrier, and a walker…not a costume, just a typical day.