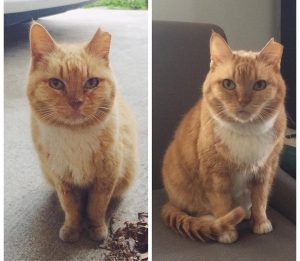 (I must tell you that as I type this, my cat’s head rests less than two inches away from the keyboard, her butt is under my chin, and she’s intently watching the letters dance across the screen. Dammit…she just put her claw on the space bar and keysaaqwjefprgn kbfldblhldf gdsfd.)

I didn’t pick it. My boyfriend, who thinks he’s completely charming when he names animals in a way that a five-year-old names stuffed animals, did it.

I call her Nugget. Or Fluffy Butt. Or that sound you make when you make kissy noises. It doesn’t matter. Animals don’t know their names; they just know that good things happen when you say the word that is their name. And it’s ok because a relationship with a pet goes beyond names. Isn’t in incredible that we can create a rapport with something that is not of our species, not of the same intelligence, and who we do not share a common language with?

(She just laid her head down on the mouse. This post is becoming challenging to writekfdhlghfdg;khblkgbgc vdsaq.)

TTTThis past year has been magical, watching this guarded, fearful cat give a little bit more of herself month after month.. Though FatFace was well into her adult years when I took her in — she’s somewhere between 6 and 8 years of age — it was like watching a kitten discovering the world for the first timexcxcxcc. FatFace was finally able to be cat: rolling over on her back as she tossed a pom-pom between her paws, attacking that evil, evil string, purring like there was nobody listening. Even to this day, a new character trait will make itself known, and I’m completely enamored with the process.gfbfbbg

(My neck hurts, but I can’t move. I can’t disturb her rest. She slept in ant hills and pissed-filled puddles for years. She controls me now. Did you read that, FatFact? YOU CONTROL ME.)

When I think about the years I missed before she moved in, it saddens me to think of all that time lost. What did FatFace look like as a kitten? Did she have kittens? Where cvdfklggedsfkj gj jfi fj