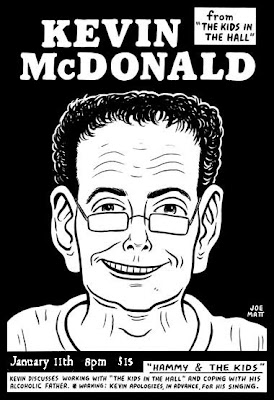 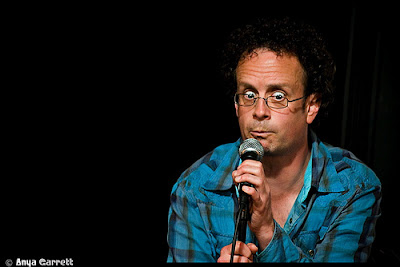 Kevin McDonald had a pretty shitty upbringing.
Remember The Kids in the Hall skit, “Daddy Drank”? (see below)
Well, that was his childhood.
Full of memories of an alcoholic verbally and psychically abusive father named Hamilton- Hammy for short. He was a dental equipment salesman and he liked to remind Kevin that he was fat and couldn’t meet girls.

Like the beginning of many biographies of comedians, Kevin’s burden pushed him to become “the funny guy” and after getting kicked out of acting school, he joined Toronto’s Second City Improv where he met Dave Foley and this other dude who is pretty much the equivalent of “the other guy” in Wham! It was there that they formed the first incarnation of The Kids in the Hall (a name that Jack Benny gave the young writers hanging around his offices). After a few years of performing the Toronto comedy scene, the group met Mark McKinney and Bruce McCulloch (who were part of a popular Calgary comedy troupe called The Audience). The teams combined forces and took Toronto by storm!

But where did Scott come from, you ask? Well, as Kevin explained, Scott just kept showing up at their shows and forcing himself onstage (Kevin shares a number of stories about the “functioning craziness” of Scott Thompson).

The troupe spent years writing and developing new material. They broke up for some time in the mid-80’s to work on separate endeavors (Mark and Bruce had brief stints as writers on SNL, Dave tried acting, and Scott and Kevin kept doing improv), but ultimately reconvened and landed a TV pilot for CBC and HBO with SNL creator Lorne Michaels. During this time, Hammy’s drinking got worse. His family had already left him and he was living on the street.

Kevin goes on to sing and dance (using those words lightly) the history of The Kids in the Hall (the successful five year TV show run, the Paramount feature, Brain Candy, a number of popular comedy tours, and their latest TV venture, “Death Comes to Town“) and his father’s further decline into alcoholism. During the crucial script deadline for Brain Candy, Kevin’s father called to tell him that he locked himself up in a hotel room and would drink himself to death unless Kevin came to see him. Kevin arrived at the hotel room to see the bed covered in blood and his Dad incoherent and refusing to get help. Being a self-proclaimed passive aggressive (another song featured in the show), Kevin finally let out years of anger towards his father and forced him into the hospital.

As the show ends, Kevin explains that there is no happy ending for him to conclude with. Though his career has continued to survive with The Kids in the Hall, he never had the fairy tale movie ending-esque heart-to-heart with Hammy, who died about ten years later.

This show was dark. Some friends even complained that it may be too dark, equating it to a public therapy session with a sad middle aged man. However, that was my favorite aspect of the show. Having been obsessed with The Kids in the Hall from the ages of 15-18 (and wanting to move to Toronto to become a filmmaker because they were from there and because I was an asexual nerd) and knowing every nuance of their biography, this shed a whole new light on not only the never-before-heard facets of the troupe, but what made Kevin into Kevin. Though I thought some of Kevin’s jokes seemed a little force, he proved to us again that one of the areas he’s best at is story. Kevin’s characters always balanced the fine line between comical and pathetic (think “Weekend with Daddy“or Chris Cooper’s father in Brain Candy, which I kept help but feel are homages to Hammy), and that is exactly what “Hammy and The Kids” is. Kevin knows just how to take us on that emotional roller coaster of snickering one minute, then wondering if you should be laughing at something so horrible the next.

And I believe that is the essence of what made the Kids in the Hall so great. Finding the funny in the sad reality of alcoholic fathers, awkward adolescence, homophobia, dead-end jobs, and Canadian suburbia .

Here is an interesting interview with Kevin regarding his show and the other Kids reactions to it at The Onion’s A..V Club.

P.S. and on a side note, if anyone cares, my ex, Mustache, the one I wrote the post about and got in trouble with, we’re all cool now.