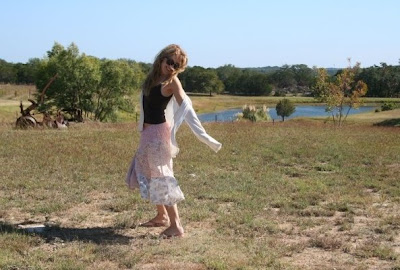 I was born from a musician and an artist. One took the safe route her entire life and regrets it, the other jumped on the Autobahn to creative anarchy. My father tried going the safe route- which included marriage, kid, and steady employment- but ultimately he couldn’t handle the confines. Do I blame him? No. Because I’m just like him. “And that scares me,” my mother can often be found saying. But we live in a time where if a young person decides that they don’t want to take the safe route- they don’t have to– and I know I will not settle down until I’m ready.

This is not my first time making the leap. I capered from Los Angeles three years ago, when after sitting under a cloud of melancholy for five years that I mistakingly thought would move past, I headed on the road to nowhere. Anywhere. Austin, Texas.

It was by Chicago I came. Twelves months before I jumped into my car on September 28th, 2008, and headed east to Texas, I had been working on a television production in Chicago. Leaving LA for the short term and being housed in the heart of downtown Chicago proved wonders for me. A backdrop of Lake Michigan, historical architecture, fire escapes, city sounds, and down-to-Earth people stirred something within me. I bought a notebook. I began drawing my surroundings. I kept a diary. I wrote songs and song lyrics. I’d walk for hours taking it all in. I was happy. I was being creative again…and I’d be damned if I let that go.

I had never done that in LA. I had lost sight of my dreams.

Shortly thereafter I gave my boss my month notice and he was thrilled. He knew before I did that my heart just wasn’t in Hollywood. It took me another eight months until I left LA. Though I know I needed to leave, I was scared to leave my friends, my apartment, and the first city I earned my adult badge in. Finally one day, I knew when to take the jump. And I did. And I’m making the jump again.

This time I’m leaving my full-time employment with benefits because it was preventing me from achieving my creative passions and I’ve reached an age where I know better. Know better to let comfortable dictate my life. I’m being smart about it this time. I’m moving into work where I will be able to stretch my wings. I will be freelancing for the first time in my life and it is both exciting and scary. I will be working on two movies, freelance writing, and revamping Hipstercrite all in the city that has become my home.

It has taken me 28 years to find my way. Now was the time to make the leap and I can’t wait to see where I land.

Have you ever made the leap?