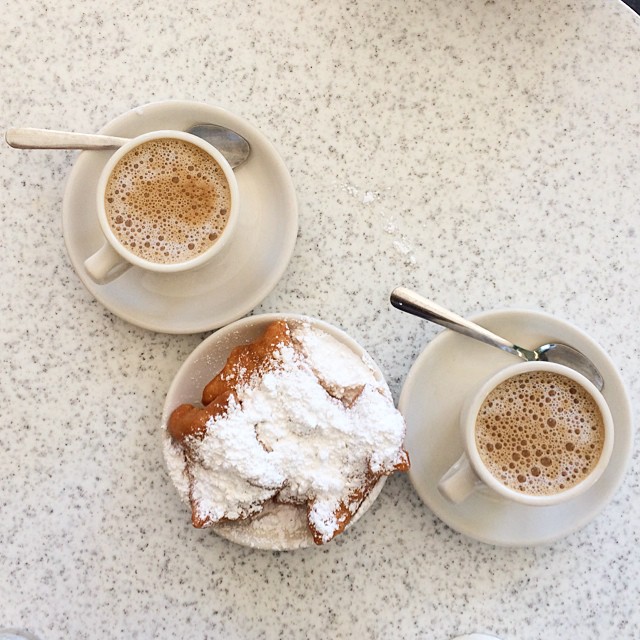 Sometimes I’m that person who loves going to Whole Foods on Sunday morning, New York Times in tow. I feel as though I should apologize for it, or at least make fun of myself for it, but in truth, I look forward to this time to people watch, eat well, read or strike up a conversation.

Today I sat next to man who was also reading the paper. We got chatting about newspapers- “Did you see that they revamped the New York Times Magazine?”- and about three exchanges in he asked, “Are you Jewish?”

I laughed and nodded my head yes.

I quickly added that I’m non-practicing, but that I’ve been interested in exploring the culture. My culture.

“Don’t worry- most Jews are that way,” he pointed out.

“My family is from Eastern Europe. My Grandmother was raised in an Orthodox Jewish household, and I think it scared her,” I explained. “My grandma raised my mom without religion and so on. My mom and I would like to reconnect with our roots.” This is something I’ve been telling myself for the past ten years, but I’ve given little effort to the desire.

He told me about JCC, the local Jewish community center, which is a place I’m familiar with, have wanted to go to, but am too lazy to drive to.

“No ‘should’. You’ll know when you’re ready,” he replied. “I didn’t reconnect until my dad died. I was searching.” A recent transplant to the city, he’s now active in many local organizations.

“Plus, anti-semitism is on the rise,” he added. I nodded my head in agreement, thinking about the recent attacks in Europe.

We exchanged stories of living in LA- he was an 18-year-old lifeguard at the Beverly Hill Hotel in 1966; I was a personal assistant for five years- and we discussed our pasts- he is 67 years old (I never would have guessed), he was born and raised in Denver, he lived in New Mexico for fifteen years, he is a mortgage banker, his 95-year-old father worked up until the day he died and his 90-year-old mom still plays tennis four days a week.

“I don’t care for women who have had plastic surgery,” he added.

He was handsome and fit, the sort of salt-and-pepper-haired man who looks like he just stepped out of his living quarters housed in a Target advertisement. He flirted lightly, but mostly our conversation was one between an older, experienced man and a young woman interested in hearing what he had to say.

“See, Jews can talk forever. I’m talking your ear off,” he said.

But I didn’t mind, because yes, we Jews do like talking. We like learning. This is why I’ve wanted to reconnect with my heritage. Any time I meet a Jewish person, I feel like I know them. There is an instant rapport. They are some of my favorite people.

As we parted ways, he stressed checking out the Jewish Community Center.

My conversation with the salt-and-peppered man has stuck with me today. As a young woman who relates more to the adage “Spiritual but not religious,” I think it is the religion that has kept me from reaching out to my past- from connecting with my community so rich in history, culture, heartache and triumph.