Something that helped me get through a particularly challenging few weeks was buffet-watching Jennifer Westfeldt films. Some of you may know her as the writer-actress of Kissing Jessica Stein, Ira & Abby and Friends with Kids, or some of you may simply know her as Jon Hamm’s long-term partner, which is too bad because she’s a brilliant and funny fox in her own right. Though her three features are mostly variations of the same story (neurotic Jewish girl and her creative friends search for love in New York City), they all had the qualities of a 70s’ Woody Allen films with Westfeldt feeling much like an Annie Hall archetype. She’s beautiful, charismatic and neurotic as all hell. Her characters are all Seinfeldian, the sort of exhausting upper-middle class Jewish New Yorkers that you both relate to and want to bitch-slap.

Westfedlt got me thinking about my favorite female film characters, characters that defy the Hollywood norms. All my favorite characters are real women. They don’t just act conventionally by dating or getting married or having children, they also have affairs, cut themselves, second-guess themselves and act like giant idiots. Forget the Jennifer Anistons, the Julia Roberts, and the God-awful Katherine Heigls; forget all the other cardboard cut-outs of women that Hollywood thinks we relate to.

These women below are my kind of women, the sort of women I’d like to shoot tequila with.

P.S. If I had liked Tiny Furniture, then Lena Dunham’s Aura would be on this list- but she’s not.

Who are your favorite strong female film characters? 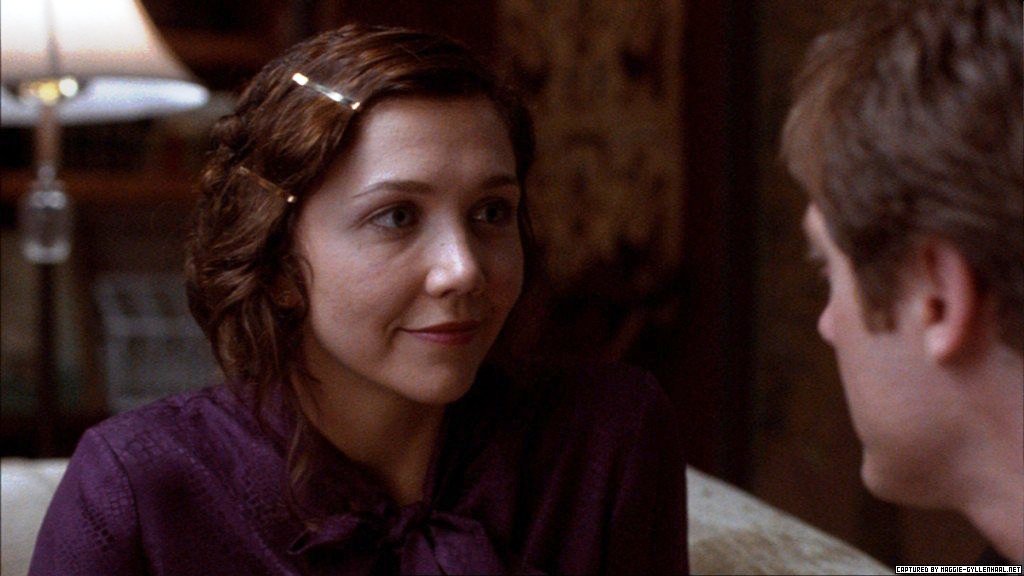 1.) Character: Lee Holloway
Movie:  Secretary
What Makes Her Awesome: Lee Holloway has issues. Lots of them. Not only does she cut herself, but she has very low self-worth (the beginning of the film sees her leaving a long-term mental health facility). She gets herself tangled up in a delicious S&M relationship with her (in only the way James Spader can be) creepy boss, E. Edward Grey. The film follows their imbalanced relationship (Grey tries desperately to stay unemotional; Holloway develops feelings), while  we watch Lee slowly gain her confidence in what she wants. And what she wants is a fucked-up lawyer with several sexual assault lawsuits and…spoiler…she gets it. The film ends with a Hollywood happy ending- which doesn’t happen in the Mary Gaitskill short story this is based on- but how could it not? Two completely messed up individuals have finally met their perfect match.
Best scene: In order to get her point across to the man she loves, Lee goes on a hunger strike and holes herself up in Grey’s office. After watching a meek Lee tip-toe around her life for most of the film, we finally see her determined, albeit exhausted.

2.) Character: Jenna Hunterson
Movie: Waitress
What Makes Her Awesome: Jenna is a delightful curmudgeon. Not only does she hate her life as a waitress in a small town, but she already hates the baby inside her stomach given to her by her abusive and controlling husband. She spends most of the film telling her unborn baby how much she doesn’t like it. If that’s not bad enough she…spoiler…has an affair with her incredibly adorable and married obstetrician played by Nathan Fillion. Neither of these traits are charming, but writer-director Adrienne Shelley and actress Keri Russell brought the perfect amount of authenticity and charm to Jenna that makes you forgive her for all her flaws. Similar to Lee Holloway in Secretary, throughout Waitress we receive the reward of watching an uninspired woman finally break out of her shell.
Best scene: After giving birth and falling in love with the daughter she once hated, in one fell swoop at the hospital Jenna both kicks her husband to the curb and tells her obstetrician boyfriend that she is through with him. 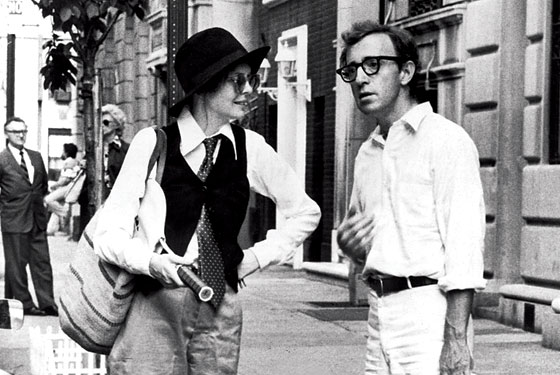 3.) Character: Annie Hall
Movie: Annie Hall
What Makes Her Awesome: How can I leave dear Miss Hall off this list? Before GIRLS, there was Annie- a confused and slightly self-involved young woman trying to figure out life in New York City. She’s a walking conundrum: Annie rambles and backtracks while talking, yet she confidently dresses in men’s clothing. She’s the shy girl who wears her personality on her sleeve, the beautiful singer who doesn’t understand her talents and a clueless bewitcher of men. It is her lack of filter and insecurity that attracts the charms of Alvy Singer (Woody Allen), but as the movie progresses, we watch as through the help- purposeful or not- of Alvy, Annie blossoms into a confident and outspoken woman.
Best scene: After meeting for the first time during a game of doubles racquetball, Alvy tries chatting up the nonsensical Annie. Every time Alvy asks her a question she lies, changes her answer or adds charming silence fillers such as “La-di-da, la-di-da.” You can’t help but fall in love with her from the second you hear her speak.

4.) Character: Annie Walker
Movie: Bridesmaids
What Makes Her Awesome: Are all adorable and quirky female characters named Annie? Like many characters mentioned before, Annie is a delightful mess. The sort of hot mess we can relate to. Her bakery business failed, her boyfriend left her, she sleeps with a douchey dude (played wonderfully by Jon Hamm) and she lives with a horrible roommate. She loves her best friend, Lillian (Maya Rudolph), but she can’t help but feel jealous when her fiance’s husband’s rich and pretty wife starts taking Lillian’s attention away. The film is a classic love story between platonic friends. Though Annie might be a little more off her rocker than most of us, we can relate (to some extent) to the pain that comes with “losing” a friend to a spouse or another friend.
Best scene: A drunk and belligerent Annie tries to sabotage her best friend’s wedding by punching and falling into a giant cookie. Perfection.

5.) Character: Scarlett O’Hara
Movie: Gone with the Wind
What Makes Her Awesome: Scarlett was the first neurotic cinema lady. Er, whom I kidding? She was a plain ol’ bitch. Scarlett is hard to like, but her tough-as-nails attitude makes us and her beaus keep following her around like a little puppy dog. Scarlett was not only spoiled, but she knew she was beautiful and used her beauty to get what she wanted. And what she wanted was the unavailable Ashley Wilkes. Gone with the Wind is a f’ing long book and movie, but in short, Scarlett becomes a shrewd business woman, marries tough-guy Rhett Butler and has a child (spoiler…that kid kicks the bucket). She takes her entire life for granted because she wants friggin’ Ashley, but in the end, she realizes what she had and what she lost. Scarlett was kind of a terrible human being, but she definitely kept it real.
Best scene:  Scarlett standing against the painted backdrop of dusky Georgia, vowing to stop being a pussy and take care of her loved ones in wake of Sherman’s destruction.

6.) Character: Marion Ravenwood
Movie: Raiders of the Lost Ark
What Makes Her Awesome: None of Indiana Jones’ paramours matched the brawn and beauty of Marion Ravenwood. This no bullshit-bar owner and daughter of an archaeologist was a feisty match for the emotionally aloof Jones. Their love affair started when Marion was only 14 (!) and Indy was 24 (gross?). Quick to hold a grudge, Marion wasn’t so nice to her former flame upon seeing him many years later in Nepal. One-part tomboy and one-part potential model, Marion is the sort of girl we wish we could be. Not only does she get to go on adventures with Indy, but she’s not afraid to give her pedophile boyfriend a piece of her mind.
Best scene: Marion might have one of the best introductions in the history of cinema: we meet her drinking a large Nepalese man or woman (?) under the table. 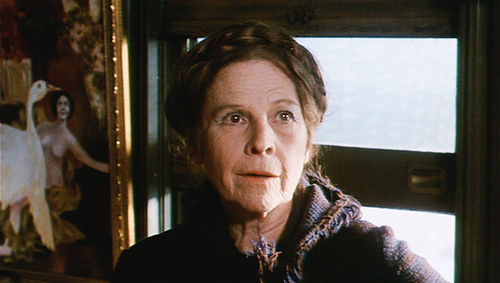 7.) Character: Maude Chardin
Movie: Harold and Maude
What Makes Her Awesome: How much do you hope you’ll be this sassy when you’re older? If only we could all be as free-spirited and open-minded as Maude. Played perfectly by Ruth Gordon, Maude laughs in the face of death by attending random strangers’ funerals. She lives life to the fullest and doesn’t care what others think (she plays the banjo and lives in a train car). Ruth has lived the life she’s wanted and she decides to…spoiler…die on her own accord. Though the ending is sad, it’s tough to cry for a woman who had no regrets (and just shagged a man fifty years her junior).
Best scene:  Every scene with Maude in it.