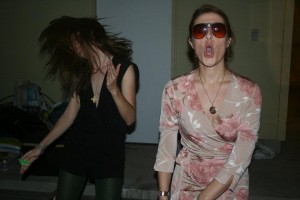 I’m halfway through my 28th year and so far it’s been an amazing exercise in self-discovery. I never thought I could make the leap to freelance, I never thought I’d meet someone I connect with so well, I never thought my hair would be popping out grays so quickly and I never thought my metabolism would shift. For the first time in my life, I have a little paunch that I can’t get rid of it. I’ve decided to own the extra ten pounds that I gained earlier this year, but it’s still disheartening when you spend five minutes jumping up and down trying to get your pants over your ass.

Now, I really don’t have any plans for after 30. Coming up with goals for 25 and 28 were hard enough! Jeez! I guess I need to figure out something for the next ten years. But the next ten years include scary things like marriage and children! That one I’m just going to play by ear. In that area, I still feel like such a child. It boggles my mind that anyone my age could possibly know how to care for another human being, but maybe I’ve just been in an arrested state of not wanting to grow up. Or maybe it’s because I’m an only child of a divorced family. Or maybe I’m just selfish.

I’m going to focus on the career goals past 30 first. This is the first time I’m actually thinking about this, so if I spew out a bunch of stream of consciousness, please bare with me.

Anyone have any idea what I will have written at 30?

Oh man…ummm…about a twenty-something girl who has no idea what she’s doing with her life?

Ok, that’s cliche, but at least I know a lot about that topic.

And, I will have actually written the book I never wrote at 30!

Ok. At 32 I will have finally finished the first draft to a book I was supposed to write at 30 about I don’t know what.

Oh man, I have to think that far ahead?

How does anyone plan for their future?