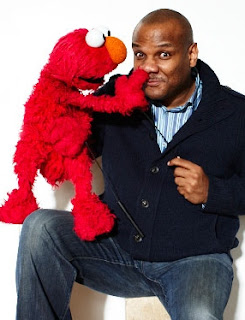 Kevin Clash grew up in the projects of Baltimore during the 1960’s. Being the awesomely nerdy kid that he was, Kevin idolized Jim Henson. He spent much of his childhood making and performing with puppets- something that wasn’t necessarily hip in inner-city Baltimore. However, Kevin didn’t giving a flying patootie what other people thought and neither did his folks, who helped encourage and support their son’s creativity and talent.

Kevin started to make a name for himself in high school where he performed one-man puppet shows for charities and hospitals. This caught the attention of a local producer who put the young man on the Baltimore cable access show, Caboose. At this point Kevin had dozens and dozens of hand made puppets lining the walls of his parent’s house. Recognizing that her son could do something with his skills, Kevin’s mother called Jim Henson’s puppet creator and Santa Clause-lookalike, Kermit Love, and spoke of her son’s knack for puppetry. Love was taken by the young man and gave him a standing invitation to visit the next time he was in New York City. The problem was, Kevin’s family didn’t have money to send him to NYC. Luckily enough, a high school field trip brought the young man to the city and Kevin broke away to meet his hero.

Kevin’s enthusiasm left an impression on Kermit who helped him land a gig on the Sesame Street/Muppets float in the 1979 Macy’s Thanksgiving Parade. It was there that Kevin first met his idol- Jim Henson. Henson liked Kevin’s pizazz and never forget him. After stints on Captain Kangaroo and The Great Space Coaster, Kevin was invited to perform on Sesame Street where he became a full-time puppeteer in 1984. Kevin also went on to be offered gigs on The Dark Crystal (a role he had to turn down due to his full-time work on two television shows) and Labyrinth (remember Chilly Down?).

Though Kevin was well-respected in the puppet world, his big break would occur the day that fellow Sesame Street colleague Richard Hunt threw a moppy red puppet onto his lap. Hunt had been performing Elmo for the past couple of years and didn’t particularly like the character. He brought a rough, New York garbage man-approach to the puppet and it just wasn’t working. Kevin played around with his voice and decided that a cute, child-like innocence would work better. And it did. The writers of Sesame Street became excited about Elmo and the character took off.

At this point in the documentary we shift from the historical chronology of Kevin and Elmo, to Kevin’s own personal struggle with work and family. After the success of Elmo, Kevin found himself traveling all over the world and unable to spend time with his beloved daughter. Elmo brought so much joy to kids everywhere, yet the man behind the voice had no time for his own daughter. Now that Kevin has been in the business for 30 years, he’s calling his own shots and has arguably earned his spot in puppet history next to the idols of his youth.

I sat next to an elderly woman during the screening who was dabbing away tears as much as I was. At many points throughout the movie she and others applauded the man we were watching on the screen. Being Elmo has that effect on people. You want to stand up and cheer for the kid who had a dream and achieved it and for the man who brings joy to millions of people world-wide. I left the screening feeling inspired. Recalling the memories and joy that Sesame Street and The Muppets brought and continue to bring me mixed with my own recollection of how my mother encouraged and supported my quirks and skills as a child made this screening more than just an enjoyable experience. It reminded me that there are so many talented and good people in this world and I’m so happy that man who has been forced to hide behind a mound of red fur and googly eyes has finally had his true voice heard.

Kevin Clash was at the screening and he brought Elmo…and I had to leave in order to make it to the Pee-Wee Herman screening that I never made. I’m so disappointed that I didn’t get to see Elmo in action, but I have wonderful memories of this documentary lingering in my thoughts. Director Constance A. Marks and her talented crew did an excellent job of telling Kevin’s story. I highly recommend this film. The next screening will be at the Dallas International Film Festival March 31st-April 2nd.