I can’t get over at how much around this time Austin looks like LA. As I was sitting in a cafe downtown waiting to hook up with my publicist friend at the party for his client, Edgar Wright, and watched all the people in fancy clothing waiting in lines, I thought, “I’m absolutely 100% in Los Angeles again.” However, only in appearance. New Yorkers and Angelenos trickle in by the boat loads during SXSW, but the spirit of the city doesn’t necessarily leave. In fact, the outsiders adapt to us. It’s still good ol’ Austin at the core. Austin brings the best out in celebrities, or it only brings the best celebrities. I’m not sure which. Either way, this point was proven to me when I hung out with one of my childhood idols this weekend.

Friday night my gentleman friend and I went to the opening party for SXSW. The party was hosted in a gargantuan space in the middle of rowdy 6th Street. We were chatting with various folks when I recognized the man standing next to me as Dave Foley. As many of you know, I’m stupid about the Kids in the Hall. If you don’t know, I will tell you that when I was a high school student I wanted to go to film school in Toronto because of the Kids in the Hall. A fact that I told Dave Foley after my 3rd tequila shot.

I was sort of starstruck spotting Dave and I would have been too shy to say anything, but gentleman friend is not, so he walked right up to Dave and was like, “Hey!” and Dave said, “Hey!” back and that started an entire evening of drinking and hanging out with Dave Foley… and me resorting back to a nerdy 15 year-old girl and calling my mother at 2:30AM going, “You will never guess who I’m doing tequila shots with!”

Dave is in town for his new stand-up venture. If you checked out his super interesting podcast on Mark Maron’s “WTF?” Dave talks about how he’s doing stand-up to pay for his astronomical child supports bills in Canada. I couldn’t help but think of this when I saw him standing at the bar ordering drink after drink.

Dave was totally cool. He looked you in the eye when you spoke. He listened to what you were saying. He leaned in closer to get a better listen. He was interesting and funny and looked like he was having a great time, though he was there by himself.

And for some reason I felt totally obliged to tell Dave about the four times I saw the Kids in the Hall live, and about how I totally fell in love with their latest project Death Comes to Town and how I saw Kevin McDonald’s one-man show Hammy and the Kids recently and he didn’t seem to mind the fact that I was totally geeking out on him at all. In fact, he told me that they’re planning on doing another series like Death Comes to Talk and how everyone in the Kids is a fan of Kevin’s show. I love the Kids a lot, and I can talk about them for years, so it was nice talking to someone who knew what I was talking about because he was there. I told him who I used to work for in LA and he pointed out that they were in a movie together and we talked about Los Angeles and then gentleman friend invited Dave tubing on Monday (today) and Dave was totally for it and we all just laughed and drank and gentleman friend got going on about physics and we were all like, “whoa….” (see below) and then the end of the evening came and we said bye to Dave Foley.  I really didn’t take much weight into Dave actually coming tubing today, but an acquaintance said he ran into Dave yesterday who asked when we were all going tubing. So, in other words, my friends are going tubing with Dave Foley today and I’m sitting at my work computer writing this.

P.S. Saw some great movies this weekend that I can’t wait to talk about with you! 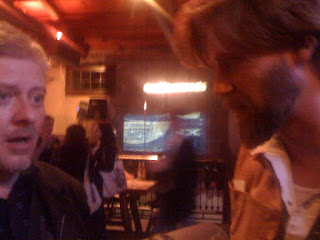