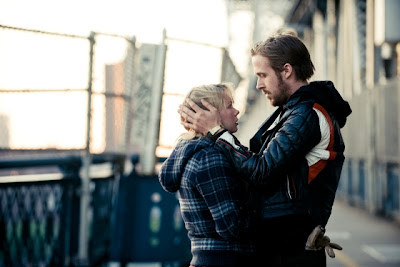 I wrote this review back in October when I was lucky enough to see Blue Valentine at the Austin Film Festival. P.S. I write reviews like a ten year-old child.

Did you see Blue Valentine? What did you think?

It takes a lot for me to get excited about going to the movies… and by excited I mean sexually aroused when Crispin Glover has a new movie out. However, when I saw the trailer for Blue Valentine over the summer, I knew I had to see this movie.

A tragic love story named after a Tom Waits song starring Ryan Gosling AND Michelle Williams?! Hell, that is a hipster’s three-tier boner right there. The super hyped film- currently making the festival circuit with an expected release date of December 31st, 2010- was screened at the Austin Film Festival to a packed and very somber house. There was not a dry eye- from guy or gal- by the end of the movie. In fact, the girl seated next to us had to leave the theater and I had to drink more than one glass of white wine.

So why does this movie have everybody crying? It is a very real and very humbling portrayal of the dissolution of a marriage. Dean (Ryan Gosling) and Cindy (Michelle Williams) have a modest life equipped with blue collar jobs, ranch home in Pennsylvania, receding hairline, and JC Penny wardrobe. Early on, it becomes apparent that the marriage is in a robotic rut and the only thing maintaining the plastic facade of a functioning family is the common love for their young daughter, Frankie (adorable newcomer Faith Wladyka). Desperate to recapture the love that has been slowly slipping from their grasps, Dean suggests an impromptu romp at a nearby erotic hotel. The reluctant Cindy obliges and thus begins the cinematic juxtaposition of their painfully uncomfortable attempt at salvaging their marriage versus when they first courted and fell in love. Dean and Cindy were crazy about each other at one point, but somewhere along the way their car broke down along the yellow brick road.

The demise of a relationship- the uncomfortable moments, the painful sex, the constant state of heightened emotion- is something that all of us can relate to. Just as we can still remember the moment we first fell in love. This allegory in addition to the award-worthy performances by Gosling and Williams makes for a beautiful and freshly unique contemporary film. Blue Valentine is a movie where you forget that you are watching actors and firmly believe you have been dropped into a stranger’s life. Every awkward pause, every flinch of pain makes you tense in the notion that you’ve experienced this before and are now forced to watch someone else go through it. Gosling and William’s chemistry leaves the viewer breathless; their frank interaction suggesting that these two have been married for years. Though a self-proclaimed non-method actor, it’s difficult not to see the comparisons between Marlon Brando and James Dean in Gosling’s performance. Like the aforementioned talent, Gosling perfectly balances the I-don’t-give-a-shit attitude with the rumblings of emotion ready to burst from his seams. Our hearts break as the harder Dean tries to hold onto his family, the more they slip away. Gosling definitely found a worthy partner in Williams. She brings no less talent and believability to her performance. Williams’ delicate features and ghost-like nature only adds to the tragedy of her character. We too find ourselves bunching our hands into fists as she achingly goes through the motions of having sex with her husband.

Though most of the beauty of Blue Valentine falls on the talent, it would not be fair to exclude the gritty photography of the young director, Derek Cianfrance. One of three writers on the film, it’s easy for the viewer to assume the amount of dedication and emotion Cianfrance put forth on this project. It’s apparent that everyone who worked on the film firmly believed in it.

Blue Valentine is not an uplifting film, but don’t let that scare you away. In a time of studio remakes and vapid blockbusters, a little dose of raw performances mixed with depressing subject matter is good for you.

Unless you’re going through a divorce.

Then stay away from this movie like the plague.