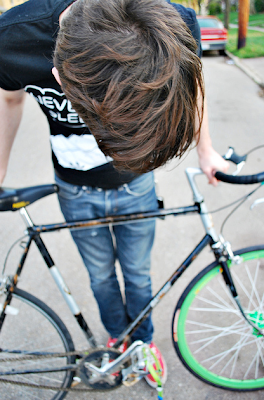 (*note to potential new employers down below)

Remember that dude with the Wayfarers and handle bar mustache that crashed my birthday party last week?

The one who was drunk and screaming Serge Gainsbourg songs?

Yes. I saw him again at the social bike ride and he asked me out.

Was he singing Serge Gainsbourg again?

So, what did you say?

I told him that I would have to think about it, but then we ended up making out at the bar anyways.

Have you gone out on the date with him already?

Well, so, he calls me on Tuesday to tell me that he has this coupon for unlimited buffet of tacos and margaritas at some chain restaurant in Round Rock.

Did he pick you up?

Nah, he doesn’t have a car.

So how does he get around?

His car was repoed?

So, did you have to pick him up?

Where does he live?

On a mattress in his brother’s back yard over on east 10th.

He says it’s to help him with his music.

How old is he?

How old are you again?

Um…ok…so, you picked him up and…

Well, when I got there, he wasn’t there.

I texted him and about an hour later he responds with that he’s over his buddy’s house for band practice and that he completely forgot about dinner.

So, about an hour after that, he gets back to his brother’s place and he smells like Jack Daniels hasn’t taken a bath in a few days.

So, we start to make our way to Round Rock and he realizes that he left his debit car at The Liberty about three days ago, so we head to The Liberty.

Oh man, have you been to that food trailer in back yet? So good….

Is that cute bartender with long hair still working there?

I guess so? So, we go to The Liberty and his card isn’t there. He has no idea where it is. But he tells me that his buddy works at The Brixton and he can hook us up with free drinks.

Oh, they have cute bartenders there too.

Will you quit it with that? So, we go to The Brixton and his buddy is there and they start doing shots of whiskey.

Yes, but I was hungry as shit, so I announce that I’m walking down to Wendy’s and the guys are like, “Cool…can you get us something?”. So, I walk to Wendy’s and get the most beautiful 10 piece chicken nugget meal I’ve ever seen.

They have good nuggets there.

Wait, why did you walk?

Because I was already two shots in and hadn’t eaten since noon.

What do you mean so!?

So, I get back to The Brixton and Atticus and his buddy…

Wait, his name is Atticus?!

Yes. So Attitcus and his buddy are wasted. Like, can barely stand up, on the verge of blacking out wasted.

Really? What did you do?

I picked him up and we walked back to my house.

As I held back his hair at 3AM while he was throwing up seitan that resembled baby diarrhea, I looked at my Master’s Degree framed over the toilet and started crying.

That happened to me last Saturday.

(*this post is hypothetical , based off of observations and not a representation of me)