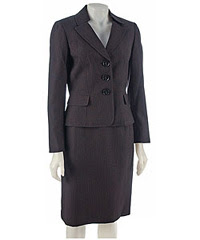 When You Give a Man Luck, He Must Fall in the Sea

Thank You For the Big Schnoz, Great-Grandma Sophie