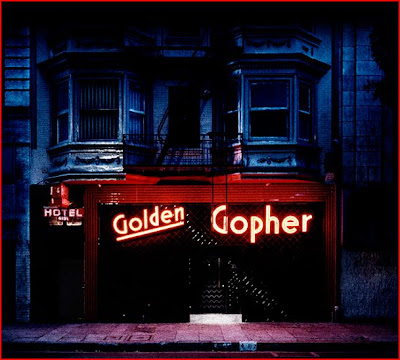 You live in one of those shoddy late 80’s peach stucco apartment complexes that looks like it barely survived the Earthquake of ’94. A prostitute eyes my car from under the street lamp as I wait for you.

I see you ascend from the barb-wired decorated front door and you look more beautiful than I even remember. You are wearing a light blue collard shirt that matches your eyes perfectly. Your blond hair is neatly tussled and I see a hint of five o’clock shadow on your rigid jaw line.
You jump in my car, smile, and I’m ready to drive anywhere with you.
Then you start talking. I didn’t remember you sounding so child-like before, but that’s ok. I’m sure you’re nervous.
“How was your day?” you ask.
“It was good. Busy. We’re in pre-production on a TV pilot for cable. A little stressful around the office. What about you?” I say in return.
“Well, I don’t have a job, so I spent the day looking for a job, played some video games, and took a nap.”
“Wow…that sounds wonderful. How long have you been in Los Angeles again?”
“Nine months.”
“And you haven’t had a job at all?”
“Except for the occasional bartending and catering gig, no. However, I met with this manager today who says he really likes my look. I think he might be a gay porn producer though, I’m not sure.”
Hm. Let’s just sit in silence the rest of the way. Just turn and look at me and smile and don’t say anything anymore until we get to where we are going.
___________________________
We pull up to the Golden Gopher and are immediately harassed by a woman crying, trying to grab at our pockets. We rush in under the smoky neon light into the darkness of the bar, the only evidence of habitation is the bartender playing an arcade game in the corner and the new Arcade Fire album playing overhead.
“Oh my God, I love them!” I shout.
“Who?”
“Arcade Fire. Ever heard of them?”
“No.”
“What kind of music do you like?”
“I don’t listen to music. I mean, I guess when I do, it’s Nickelback.”
We stand there in silence in front of the bar. I look at you and try to force some sort of affirming smile that Nickelback is an excellent choice in music for a….
“How old are you?”
“27”
…for a 27 year-old man.
The bartender finally acknowledges us and walks over.
“What can I get you?”
“Whatever your cheapest on tap is.” you blurt out.
Before I’m able to order, you’ve paid for your drink and walked over to a giant couch in the corner.
“I guess I’ll have….whatever the strongest possible drink you can make is.”
As I wait for my drink, I look over at you, lying stretched eagle, chugging your beer as quickly as you can, and eyeing the Pacman arcade game as though you’re ready to make verocious love to it.
Happy 24th birthday, Lauren.
To be continued once again….
June 1, 2010 by hipstercrite

Choose Your Own Adventure