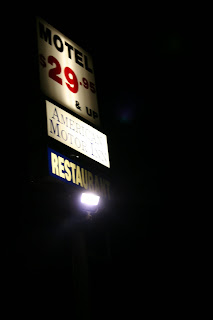 I’m sitting in a cracked leather booth somewhere in the desert of west Texas.
I squint through the blinds and a faded sign tells me that I’m at Papa’s Pantry in Van Horn.
There are three ceiling fans in Papa’s Pantry.
They’re lazy, just like the tongue of the waitress who brings me my iced tea.
Wait, aren’t I still in Los Angeles?
Who are these two guys sitting behind me with cowboy hats?
Typically such a scene would mean I wandered onto a movie set.
But there are no lights and cameras in Papa’s Pantry.
I take a deep breathe and let out a slow exhale. Somebody has finally released the nozzle and let all the air out.
It feels good.
It feels terrifying.

I slept in Lourdsburg, New Mexico last night. A railroad town, a border town. Not a ghost walked the lone sidewalk. I drove down the main drag to one cheap motel after another. Neglected and outdated signs guiding the way. They all looked the same. Midnight and stucco. Cream and rot. Somewhere in the dark, I spotted a florescent beacon that told me that was where I was to sleep.

It takes a lot to work up my nerves, but I felt I’d seen my room before. In a movie where cops discover the body of a young woman lying on the floor. I checked underneath the bed but turned up only black beetles and locusts. The room had a distinct smell, one I couldn’t quite explain. It would be easy to say it smelled musty, but it didn’t. It smelled frightening. Like sex and death. And I longed for someone to be here with me. Dangerous, macabre motels should not be experienced alone but with cheap liquor and someone else to feel the scratch of polyester comforters on bare skin. 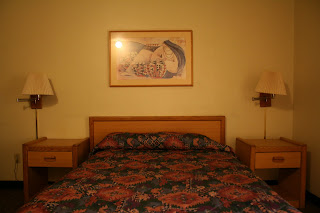 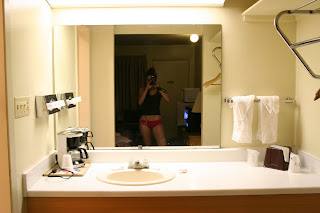 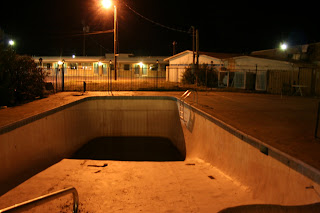 My room was sweltering. I stripped down to my underwear and texted a former lover that he should be there. I drifted off to sleep but was awoken at 4AM to my TV turning on. I glanced sideways at the nightstand and noticed that the remote was still sitting there. I calmly turned off the television but told myself I should be more concerned that the TV turned itself on. I’d occasionally opened one eye to to see if a shadowy figure was standing over me and fell back into the uneasy sleep only a motel room like that could bring. 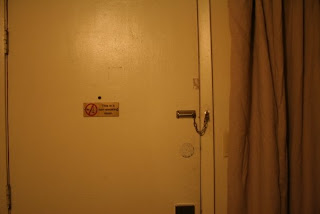 At 9:45AM a wake up call that I didn’t ask for. I was hesitant to pick it up. I expected to hear on the other end a crackly voice asking where Billy was and that if I didn’t put Billy on the phone right now, the crackly voice was going to come down to my room with a shotgun.
I let it ring and ring and decided it was time to go.

As I packed my car, an old John Wayne western on in the background, a gentleman with 4 teeth in his mouth introduced himself to me. His name was Ron and, “Yep, I am the owner of this here place.”

“Where you headed?” he asked.

“Austin, from Los Angeles. Doing some soul searching, I guess. I don’t know. You live here in Lourdsburg for long?”

“Grew up in Oklahoma, then spent some time at the casinos in Vegas, then bought this place. Now it’s my home. See, I live directly above you.”

He pointed to door above room 104. I could see through the opening that his room had the same bedding and artwork as mine. A Native American woman in pastel tones.

He wished me a safe trip and I told him that if I ever find myself in Lourdsburg again, I will stop by.

I followed the barrelling freight train through the desert and hoped I could muster up the same energy.