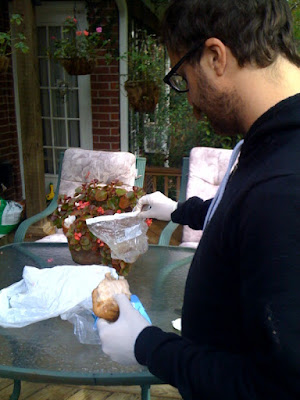 My Grandmother introduces her boyfriend of twelve years as “my great…friend”. Not “my boyfriend” or “my 82 year-old Jewish lover” or “the dude I sued because my heel got caught in an uprooted tile in the building he owns and we started dating soon after that”, but something that requires a long pause before finishing the sentence.

My Grandmother does this mostly due to her embarrassment of Lionel’s barking in public. The barking is typically followed by a swift slap to my Grandma’s surprisingly firm 83 year-old ass, then loud commentary to no one in particular about how he’s dating an “old lady”. He’ll then feign falling over, bark some more, and at this point the owner of whatever establishment they’re in, politely asks Lionel to leave. My Grandma will stand there in her teal angora shoulder padded sweater dress smiling away, when really she’s fantasizing about lining Lionel and her two ex-husbands against a wall and beating them with her treasured marbled elephant from Algiers.
I’ve been off the radar recently due to the gaining of my own “Special Gentleman Friend” (some people in my family, hometown, and probably a couple of complete strangers just lost a butt load of money there) who, unlike my Grandmother and her great…friend, I do enjoying seeing and who does not make animal noises. However, he does force me to listen to heavy metal AND rap music and has reenacted the scene involving “Zelda- the Scoliosis lady who is really played by a fucking scary ass dude in Pet Sematary” when I adamantly shouted at him not to while rocking myself into a ball. Other than that, he’s cool. So cool in fact, that he carries around 9 month old shark meat in the trunk of his car.
SGF recently traveled to Iceland on a whim. He biked the entire country, slept in tents and abandoned buildings, and partook in the culture of the Icelandics- which included eating a goat’s face and rancid shark meat. If you haven’t heard Anthony Bourdain or Andrew Zimmern’s very strong feelings on the delicacy, Hakarl is shark meat that is fermented for months (to drain the ammonia out), then dried for many more. As I described to SPG, the meat has the aroma of a dead raccoon that has been stuffed in the women’s used tampon box at the Venice Beach boardwalk restroom for weeks. But Goddammit, that smell did not stop SPG from wearing that putrid shit through customs on his way back to America.

After two seconds of meeting SGF, he will you offer you a taste of his rotten shark meat. He will describe the smell as “road kill that has been urinated on” and insist that there isn’t enough ammonia left in it to kill you. You will say “No!” if you’re a girl, “Fuck yeah!” if you’re a guy, and “Don’t get near me, your mustache smells like a dead vagina” if you’re me. No matter what you decide, the smell will permeate every orifice of your body for days and you’ll be left wondering who that strange man with the rotten shark meat in his handlebar mustache was.

He’s Special Gentleman Friend.
And I kind of like him.