The Return of Pee-Wee Herman

I’ve been waiting 18 years for this mother f’ing day.
It was announced yesterday that Paul Reubens will be reviving “The Pee-Wee Herman Show” with a limited run in November at Los Angeles’ Henry Fonda Theater. According to reports, many of the original cast and puppets will be back. Not to be confused with “Pee-Wee’s Playhouse”, “The Pee-Wee Herman Show” was Paul Reubens‘ original stage show performed at The Groundlings Theater, then Roxy Theater in early 80’s Los Angeles. The success of the show and gaining popularity of the Pee-Wee character led to the making of Pee-Wee’s Big Adventure in 1985.
A couple of years ago, I was at a film premiere in Hollywood that happened to star Paul. My friend who was a producer on the project knew my child-like fervor for Pee-Wee and introduced me to him. Now, I’ve worked with and met a lot of famous people but no one, NO ONE, made me as weak in the knees as Paul Reubens. He was quiet and shy and probably could have given two shits to have met me. I told him that I heard about his two Pee-Wee scripts that he was looking to get made and I mentioned the producer that I worked for at the time. I told him that I would call his assistant the next day and set up a meeting. And I did. And I spent my nights fantasizing about producing the next Pee-Wee movie. And I could have been struck by lightening and died a happy girl. Without getting into too much, Paul has two scripts, one that is totally doable and another that is less doable. My boss loved the doable script but as soon as his foreign distributor told him that Pee-Wee has zero foreign pre-selling ability, my boss dropped the project like a hot potato. I spent weeks trying to revive my boss’ enthusiasm for the project, but he had bigger fish to catch at that point and my dream of helping make the next Pee-Wee movie died. A lot of people have seemed interested in the project, but it appears that no one has jumped on the scripts yet. I’m not sure if it’s because of his age or how many years have passed since his hay day, but I am SO HAPPY to see that Pee-Wee will finally see the light of day now. Maybe this is the first step needed to bring Pee-Wee back to us!
*The picture above is owned by Nicole Panter, the actress who played Susan in the original Pee-Wee Herman Show. She was not only a writer for the show, but was also the manager for the L.A. punk band The Germs, a screenwriting professor, and a terrific artist/photographer, amongst other things. She’s the shit. 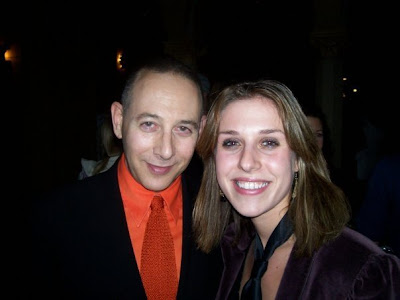