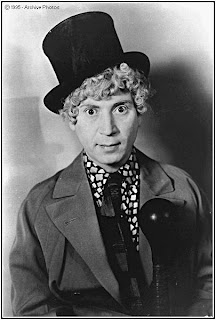 (Prepare to be blown away with my nerdiness…)

When I was a little girl, I loved many men.

Men that played unpopular instruments. Men that made irreverent jokes. Men who wore thick horn-rimmed glasses. Men with big Jewish noses.
However, there was only one man that captured and owned my tiny heart.
The trouble was, he was 110 years old and thirty years dead.
Harpo Adolph Arthur Marx will forever be my number one guy.
What makes a ten year-old fall in love with a person she’s a.) never met b.) will never meet c.) never heard speak d.) knows is about 5’5″, bald, and can’t read or write?
What factors in one’s life lead to a perverted obsession such as this?
There I would be, sitting two feet from the TV screen, watching a scratchy second-generation VHS copy of The Marx Brothers’ “Cocoanuts” or “Animal Crackers” over and over. My eyes transfixed on the impish mute bopping from scene to scene. Something about his glint suggested that he would show me the secrets to the Universe, and I was willing to following him anywhere.
I wanted to know what he knew.
So I hunted down an old copy of Harpo’s auto-biography, “Harpo Speaks”. If you’re not familiar with The Marx Brothers, Harpo and his four brothers (Chico, Groucho, Gummo, and Zeppo) grew up in a brownstone on the Upper East Side. This was no swanky pad though. This was Upper East Side 120 years ago, when Daniel Day-Lewis roamed the streets. The brothers lived with their beloved parents; the sweet, sensitive Jew, Samuel, and the boisterous, talented, Minnie, along with five other family members in a small, one bedroom house. The family could not afford the boys a formal education, so the brothers all dropped out at various points in elementary school and began working for bread (12 year-old Harpo was a piano player at a brothel). Though survival was a daily struggle, the household was vibrant with song and dance and it soon became apparent that the boys had talent. With the help of their mother and comedian uncle, the brothers took to the stage and soon became a popular vaudevillian team. So popular in fact, that they landed their first Broadway Show in 1924. Soon enough, Hollywood came a’callin’ and the boys were one of the first to join the “talking picture” movement. The brothers earned acclaim with such greats as “Animal Crackers”, “Duck Soup”, and “A Night at the Opera”. With thirteen films under their belt, the brothers secured their place in American film and are still hailed as one of the greatest comedic teams of all time.
But what makes Arthur Marx so freakin’ special, you ask?
Arthur married the love of his life, and stayed married to her until his death, which occuried on their wedding anniversary.
Arthur adopted four children, “one to wave goodbye to him in every window”.
Arthur took in every stray animal he ever came across.
Arthur, though he could not read or write, became a respected harpist, even though he taught himself to play backwards.
Arthur became a Russian spy for the U.S. Government.
Arthur was a member of the Algonquin Table because he “listened”.
Arthur set out to make people feel good, and that is what he did.
As described by his brother, Gummo: “Harpo played the right instrument. He was an angel. There was nobody like him, there never will be anybody like him. He was just simply wonderful. He never had a bad word for anybody… not like me. I at least occasionally say something. But Harpo… they don’t make that kind anymore.”
And what about stage Harpo?
Harpo only wanted to be loved. Sure he would poison or bop over the head the lady he desired, but there was still such innocence to it. An innocence that we rarely see anymore.
A moment caught from time-to-time with puppies or children.
Below is one of my favorite scenes from Duck Soup-
Below is a video on how you can help prevent the tearing down of the Marx Brothers’ home on East 93rd-
April 19, 2010 by hipstercrite