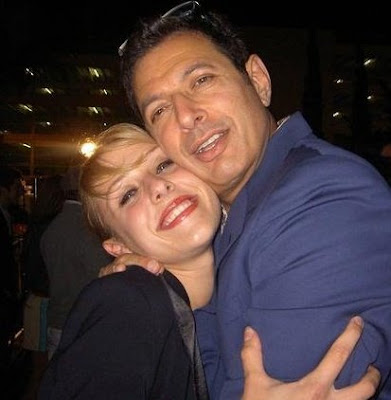 Last night, I came across an enjoyable little mockumentary called PITTSBURGH starring Jeff Goldblum. The film follows Jeff, his (cough) 23 year-old fiance, and his friends Ileana Douglas and Ed Begley Jr. as they star in Jeff’s hometown stage revival of “The Music Man”. Jeff Goldblum pretending to be Jeff Goldlbum is always a winner . I could watch the dude talk to his hands. This movie is worth checking out if you’re a fan of the Brundlefly.

I had the pleasure of working with Jeff once.

The movie was a real stinker, but that didn’t stop Jeff from treating it as if it were Oscar gold. I was very anxious to meet him. You see, I had had a whale-size crush on him when I was ten years-old. It was the year of JURASSIC PARK and even though I didn’t know what sexy was (I still don’t), I knew that there was something special about this man. His tall stature, his Mediterranean complexion, the way he talked, the way he delivered his lines, the way he moved his hands made my little ten year-old body shiver. After JURASSIC PARK, I rented every movie he was in (VIBES gets a ten in my book). My crush on Jeff eventually ran it’s course and I moved on to others (Crispin Glover, I love you!), but when I was told that Jeff Goldblum was starring in my company’s movie, my little ten year-old heart resurrected.

Jeff showed up a day before he was scheduled to shoot. He was there solely to meet the cast and crew. He started with the assistants. I walked on set with Starbucks outstretched towards my boss who was standing next to Jeff. When Jeff saw me, he stood up, held out his arms, and engulfed me. I thought he must have mistaken me for someone he knew, but that’s how Jeff greets people. Like you’re a long lost friend. Or, almost like he has a magnet in his pants and so do you. He sat with me and two other assistants and studied the crew list. “Ok, Lauren, the girl running around over there with the walkie-talkie, who is that?” We told him the names of everybody on set. When we were finished, he walked up to every single person and said, “(Insert name here), you’re doing a great job today!” Though most turned around with the perplexed look of, “How the hell does The Blum know my name?”, everyone was surprised and touched nonetheless.

Everyday Jeff was a team player. He spoke with EVERYONE. He did not discriminate (like a certain someone else on the set who is on a certain NBC show who is known for having a bad temper who upon meeting me turned away in mid-sentence after he found out I was “just an assistant”). Jeff sat with the crew for lunch, he talked with the extras, he even stayed late when he didn’t have to. Take for instance the day he and the NBC star were filming fight scenes all day. The day became evening and it was time for the actors to go home. NBC star couldn’t wait to get his cranky ass out of there. However, my day was just beginning. I was an extra in a dance club scene and me and a dozen other extras were in the parking lot practicing our moves. Jeff was walking to his Prius when he stopped. He put down his backpack and jumped in the mix. He hung out for a good 20 minutes dancing with the extras. He danced with me and near speechless I said, “Jeff, you make a girl feel like a hundred bucks!” He is the only man to ever say, “Lauren, the ball on your nose is delicious”. He held me so close that in the pictures taken, you can see my fingers digging into his upper arm (see above). What you can’t see in the picture is his boner pushing up against my thigh. Now take a look at my smile.

Jeff was originally up for the lead part in the movie, but when the investors got wet with the possibility of NBC star playing the lead, they dropped Jeff. That didn’t phase Jeff who was happy to take a secondary role in the movie just because he was a fan and wanted to support it (the film was written and directed by a first-timer). Even months after the film wrapped, Jeff called the director on his birthday.

A year later, I saw Jeff again at one of my company’s parties. I was standing at the top of the stairs. Suddenly the front door swung open and there he was. The tall, dark, and handsome man nearly feeling up everyone in his path. He spoke with the door person, he spoke with the hostess, he spoke with people on their way out the door, he even spoke to the potted plant. I walked up to him and even though I’m 110% sure he had no freakin’ clue who I was, that didn’t stop him from acting like he had known me forever. He momentarily held me in his big arms and went on his way.

It’s no secret that Jeff is a ladies man. He is the ladies man of all ladies men. Joke is he has an acting class just so he can hook up with a bevvy of beautiful twenty-somethings. You know the funny thing though? You’ll never meet a person who will say a bad thing about Jeff Goldblum. That’s because he’s a gentleman and a honest-to-God good human being.

Even if Jeff Goldblum is only hooking up with you only for one night, he will act as though you are the only thing that matters in this world. Is he just a good actor? Maybe. However, I believe Jeff really does love each and everyone he comes in contact with- whether it’s two seconds or ten years. You can see it in those wild, Jeff Goldblum eyes.
We could all learn something from Jeff Goldblum- to have a boner for just about everything in this World.
August 14, 2009 by hipstercrite