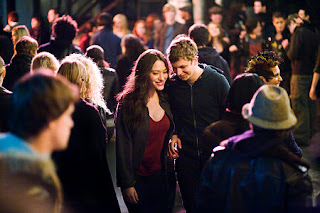 (*Note- my brain is OFF this weekend, so please excuse the crappily written review)

I sat in the Alamo Drafthouse on South Lamar anxiously waiting for NICK & NORAH’S INFINITE PLAYLIST to start. I was not a fan of the book but the combo of Michael Cera, New York City, and indie music seemed like a winning movie to me. After discovering earlier that day that I was flat broke, I was in much need of good company and good entertainment.

Before I begin, Alamo Drafthouse is the THE GREATEST PLACE ON THE PLANET. This movie theater reminded me why I love movies in the first place. If you’re not familiar with the small chain, Alamo Drafthouse shows new movies and old. A couple of times a week, the theaters will have either a movie premiere, film festival, sing-a-long, dance-a-long, quote-a-long, or any other cult-like adventure. Wanna see a screening of THERE WILL BE BLOOD on location? Alamo Drafthouse has you covered! Or dress up as your favorite character from Team Zissou? Currently there is an air sex competition going on and the chain is sponsoring the largest THRILLER dance EVER performed in Downtown Austin. The theaters also serve food and alcohol. (Note to Los Angeles, the entertainment capital of the country- why don’t you have cool things like Alamo Drafthouse, huh?)

To bide the time, the theater shows random, poorly synced music clips from the 50’s and 60’s. The lights go down and the go go dancers stop dancing. Pedro from NAPOLEON DYNAMITE comes on the screen and tells us to turn off our cell phones. The the movie starts. We meet the depressed Nick (Cera), sludging around his bedroom. He is heartbroken over his ex-girlfriend Tris (played by a girl oddly reminiscent of Topanga from “Boy Meets World”). He and his two thirds gay band, The Jerkoffs, have a show in the city tonight. Nick drives his yellow, beat up Yugo into town. At the show are Tris, her new boyfriend, and her classmates touch cookie Norah (Dennings) and drunk cookie Caroline (who might be the best part of the movie). Tris teases Norah about not having a boyfriend which causes Norah to grab the first boy she sees and kiss him. Yep, guess who that is! This puts the ball in motion for a hilarious, unforgettable evening, right?

Not so much. This movie has all the components, but something seemed missing. The magic was gone. The actors were believable and endearing, but the story was less than memorable. This movie didn’t make me pine for New York and up until about twenty minutes from the end, didn’t make me nostalgic for all-night adventures in a big city. Unlike other movies that come to mind, such as ADVENTURES IN BABYSITTING or AFTER HOURS, nothing exciting happens to our heroes. They forge through the city, landing UNBELIEVABLY good parking spots wherever they go, and bitch at one another. That’s about it. The best storyline was that of the gum in drunken Caroline’s mouth which makes it way from her, to a puke filled toilet at Port Authority, back to her mouth, to Norah’s mouth, then to Nick’s mouth. Jay Baruchel’s cameo as Norah’s boyfriend was worthless and not funny (he plays a Jersey boy in a Jewish rap band). The ending was sweet because, well, you can guess what happens, but I left the theater feeling less than satisfied. I don’t fault the director or actors for I feel like that didn’t have a lot to work with in terms of storyline. Maybe I’m too critical, but comparing another quirky, indie teen comedy from last year, this movie can’t hold a gallon Sunny D to it.