Lately I’ve been on a kick of reading non-fiction by female authors. I share this unextraordinary observation because for most of my life I’ve been a lousy lady supporter. I grew up idolizing male rock stars (I mean, who doesn’t want to be David Bowie?), I had more interest in male-driven cinema (like I had a lot of choice) and I romanticized being a Kerouac or Hemingway, drunk and bitter.

(Let it be said that I’ve been madly in love Stevie Nicks since I was 15 years old.)

I don’t know where my bro allegiance stemmed from, though I have theories that I was an old Jewish man in a former life. I guess I just couldn’t relate to a lot of famous ladies. The Madonnas and the Beyonces and the Gwen Stefanis and the Jennifer Anistons have been stripped of their womanhood; they’re now cartoon versions of themselves. They drip thousands of dollars worth of jewels and designer wear, detest being photographed in an imperfect state and they live a life that is totally unrecognizable to other human beings. Where were my real ladies at?

(I apologize to those of you who love any of the four aforementioned women. I am not judging; this is just my own personal observation. We all find role models in different types of people.)

I finally woke up.

And now I primarily listen to, watch and read work by women- strong, beautiful, creative and intelligent women.

Since the new year, I’ve read a handful of books written by female authors. Each book has been engaging and transformative in its own way. If you’re looking for a good read, check out any one of these books below. 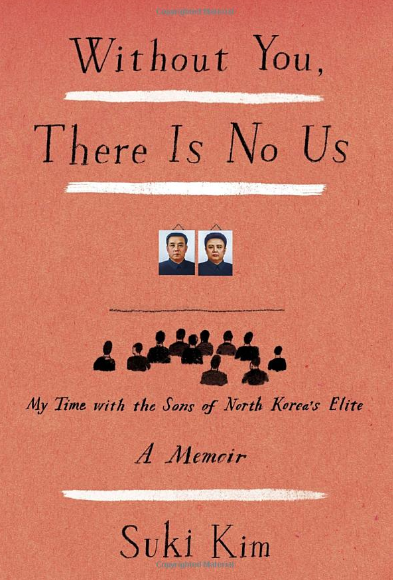 Without You, There Is No Us: My Time with the Sons of North Korea’s Elite

by Suki Kim
Journalist Suki Kim is a fine writer. In her non-fiction debut, Without You, There is No Us, she has an excellent grasp on pacing and emotion; however, it is the curious antagonist, North Korea, that makes this book stand out. Kim, a New York-based writer, spent two semesters abroad teaching the male descendants of the DPRK’s elite. Though the school Kim works at, the University of Science and Technology, is for the privileged, the atmosphere is anything but. The teenage students were not allowed off campus to see their families, and like most North Koreans, they had no access to phones or the Internet. They spent most of their days studying, guarding the grounds or praising the Great Leader (at the time, Kim Jong Il). Life was unbearable for Kim as well, who wrote of her nostalgia for her home, lover and amenities we take for granted. Due to North Korea’s suffering economy and sanctions, food is of poor quality, and Western entertainment of any kind is banned (Kim was able to get a few American films approved for class). Kim was allowed only a handful of chaperoned excursions outside the school’s walls, and it was only then when she saw how desperate North Korean life is. The novel is bleak, in a not-so-unwelcoming way, but it’s the punctuated moments of Kim’s deep love and fondness for her naive students that gives the story depth. Kim’s pupils are the most privileged in all of the country, but their minds have not been challenged or informed. Their inability to think on their own is frustrating to both their teacher and the reader, but there were rare moments of curiosity and emotion. And it’s during these moments of clarity that our hearts break. 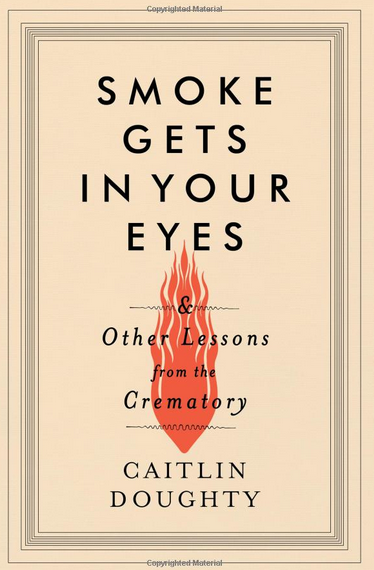 Smoke Gets in Your Eyes: And Other Lessons from the Crematory

By Caitlin Doughty
Death is a very difficult subject. Luckily, undertaker Caitlin Doughty has no problem discussing it with candor and conviction. Smoke Gets in Your Eyes is half-biography/half-history of the death industry, and it’s wholly hysterical. Doughty has no comedy experience, yet her writing is some of the wittiest I’ve read. The book takes you from her novice days as a crematory assistant, schlepping dead babies and decomposing old people into furnaces, to her graduation as a licensed mortician. Her rise from death rookie to pro is not for the faint of heart, but Doughty adds enough humor to lighten the mood: “…I pulled the van into the loading dock behind the hospital and removed the gurney. It was a bit of a farce to use a full-sized adult gurney for a few babies, but I didn’t think walking through the corridors with my arms filled with them was a particularly good plan either. I had an image of fumbling and dropping them, like a stressed-out mom carrying too many grocery bags to avoid the extra trip in from the car.” The book also shares cliff notes on the history of burial procedures and why modern man views death the way it does. Doughty believes that the American death industry has made us afraid of the Big D, with its body pickling and garish makeup, and that the family should be more interactive with the deceased’s body (she suggests that family members should hit the cremation button). As founder of the The Order of the Good Death, Doughty strives to normalize death in modern society. You can learn more about her through her Youtube channel, “Ask a Mortician.” 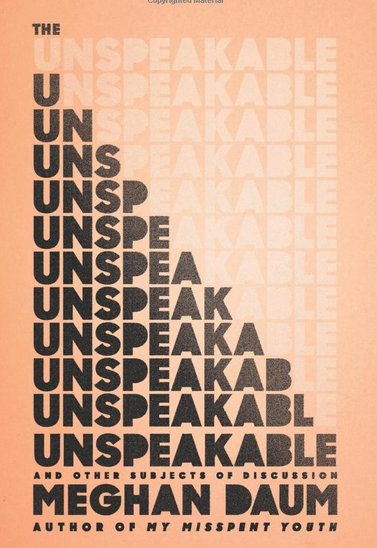 The Unspeakable: And Other Subjects of Discussion

by Meghan Daum
I have mixed feelings about Meghan Daum, and that’s the way she likes it. Half of her personal essays in The Unspeakable are relatable in the way where one looks up from the book, wanting to say to someone, anyone, “Holy crap! The author and I are totally the same weirdo person!” The other half of the essays make one wrinkle their face and silently judge, “Errrr, this woman is a turd.” Daum doesn’t make any excuses for herself. In the intro, she states that she’s not looking for empathy or pity. She’s just telling it like it is, and her honesty can be both refreshing and cringeworthy. “This book also recounts some pretty unflattering behavior on my part,” Daum writes. “Not to mention a few disclosures about my interior life that some readers will probably find depressing or even alarming. That is fine. I wouldn’t have it any other way. In fact, I suspect this is the kind of book that winds up being loved and hated in equal measure.” Her unflattering behavior is no more apparent than in the first chapter, “Matricide.” The chapter starts with Daum admitting to being on Facebook when her mother passes away in the nearby room after a long, painful battle with cancer. From there she goes on to explain the complex woman that was her mother, not with sentimentality, but with frustration, embarrassment and sorrow. The essay comes across more as a grievance than a celebration, and the rest of the novel reads in a similar manner. To say that Daum is Seinfeldian is an understatement.

Daum edited the recently released Selfish, Shallow, and Self-Absorbed: Sixteen Writers on the Decision Not to Have Kids 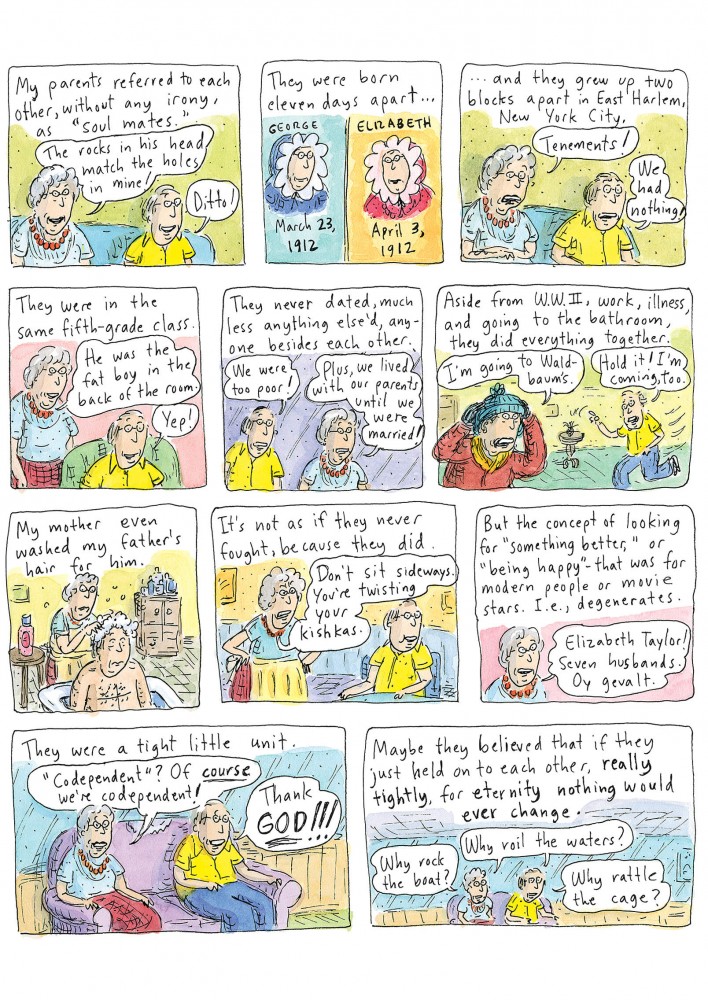 Can’t We Talk about Something More Pleasant?: A Memoir

by Roz Chast
I bought this book for my mom over the holidays in hopes that it would bring some comfort to her ever-changing role as my grandmother’s caregiver. Of course only I read the book, and it now lays in a virginal position on her coffee table. This graphic novel, written by The New Yorker cartoonist Roz Chast, appeared on many 2014 best lists and was a National Book Award finalist. Chast was the only child born to two gray-haired Jewish New Yorkers. Your mind can pretty much run wild with that; her life was about as neurotic as you can imagine. I’ll let the above panel define the book, but it should be said that Can’t We Talk About Something More Pleasant beautifully articulates the madcapness and heartbreak that comes with aging. She does not shy away from the tough moments (like when her stoic mother defecated all over the bathroom), nor does she omit the inevitable (she includes sketches of her dying mother’s face). This book will not bring you comfort, but it will remind you that we’re all in this dying business together.

Other books of note: 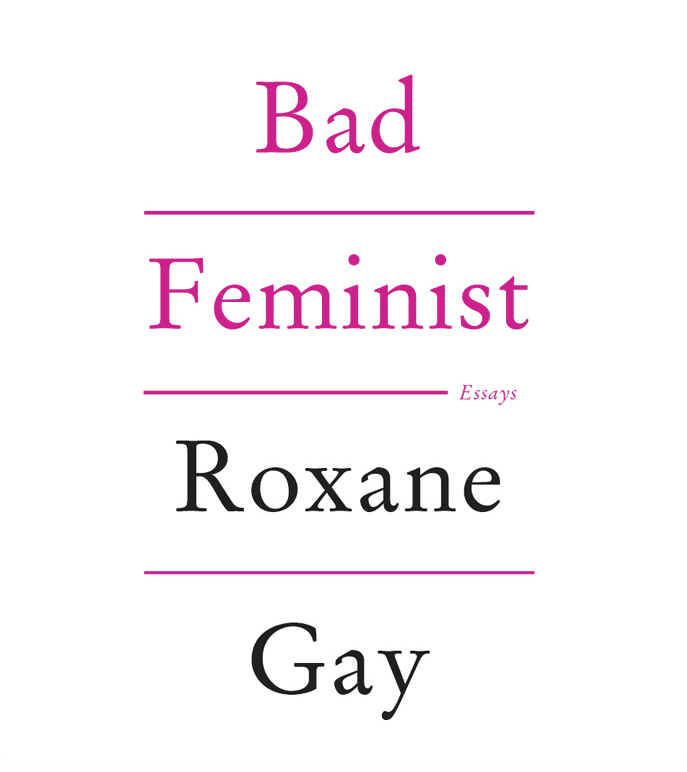 by Roxane Gay and I, unfortunately, can not recommend it. I know that many readers enjoyed this book, but I found it mostly insufferable. I almost gave up on in multiple times, but I stuck through. I guess what irks me about the book is that it’s a collection of Internet essays that read like personal blog posts written by a woman in academia (which is all true). Gay is a smart and interesting woman, but this collection reads haphazardly, with no basic narrative. Many of her essays are social commentaries on current pop culture products such as Sweet Valley High, The Hunger Games and Girls, while only a few dive into her personal life, which is infinitely more fascinating than her thoughts on current entertainment. Her more hard-hitting essays about topics such as George Zimmerman and Trayvon Martin, Tamerlan Tsarnaev and college rape read like The Daily Beast essays. I expected so much more from this highly praised book, and I’ve talked to other gals who have felt the same way. However, I suggest you try the book yourself; maybe Internet essays on race, gender and pop culture are your thing. I’m curious as to what you think. 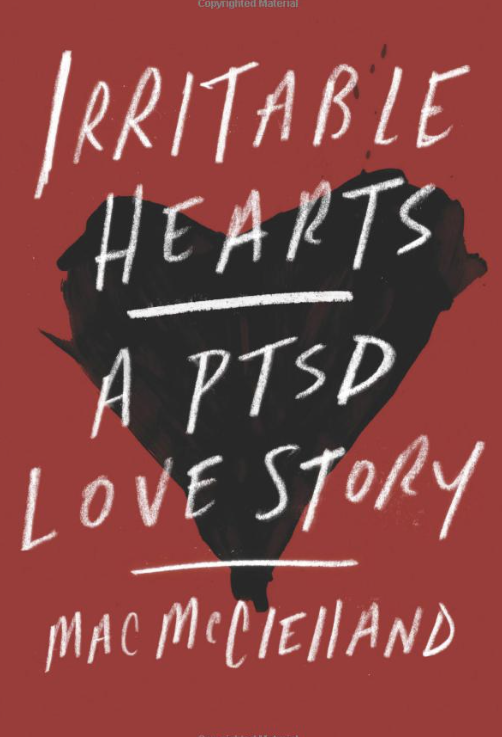 by journalist Mac McClelland. I’m only one-third of the way in, but I’ve already found this book about PTSD caused by investigative journalism boundlessly fascinating. In short: As a writer for Mother Jones, McClelland found herself in numerous situations where she either saw heinous acts of violence or was near victim to them. These scenarios caused her to sink into the murky quicksand of paranoia, alcoholism, violent sex and disassociation. McClelland’s 2011 GOOD Magazine essay about her time covering a post-earthquake Haiti, “I’m Gonna Need You to Fight Me on This: How Violent Sex Helped Ease My PTSD,” caused her a great deal of controversy, with commenters and publications chastising McClelland for being “narcissistic,” “dishonest” and “offensive.”  Similar critics have cried the same for her book, but I find her candor about being a woman in a male-dominated business in a male-dominated and often violent world enlightening. Equally fascinating are her naysayers who can’t seem to believe or respect a woman who: 1.) Describes the numerous times she was groped, sexually harassed or nearly raped on her job, and 2.) Speaks of her own unflattering challenges.