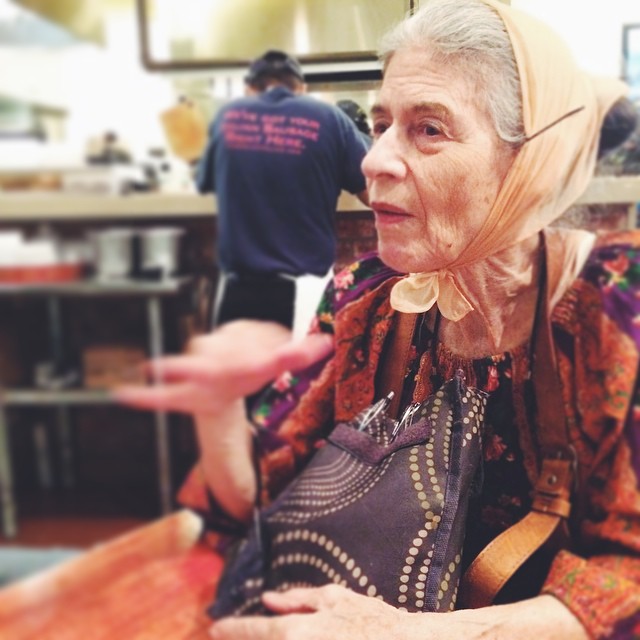 ‘Brilliant’ was a word she used often; “I don’t mean to boast” she used as well. “I was a great beauty in my youth, but look, now my teeth are breaking.” We assured her that she was in deed beautiful; her beauty had caught our eye. Philomela had previously been sitting two tables away from us, alone, smiling. Her turquoise forearm crutches resting near her. We learned that she had had polio, but that didn’t stop her from living the life she wanted. “I’m from Canada, and I was a music teacher, but I’ve traveled all over. I’m reading everything about Japan right now. Then I’m on to Italy.” She had lived in New Mexico for many years, where she had owned a wolf. “They called me the ‘Wolf Lady’ in New Mexico,” she explained. “They’re really racist there, you know. Are you Polish? The Polish are so talented. What is your heritage? I’m everything, except for African. I even have Oriental in me!” She twirled her finger around her ear, the sort of gesture you use when signifying something is “cuckoo.” She used this expression often.

“May I take a picture of you, Philomela?” I asked. “Yes, but I don’t want to show my broken teeth.” I took a series of photos while she talked, and this one encapsulates the energy this youthful, cerebral woman had. “Let me look at the photo,” she asked. “Oh, I look cadaverous.”

Philomela promised she would call me- she needs assistance with finishing her book. We asked if she needed help to her transportation, but she just rolled her eyes. We watched her walk away with her turquoise crutches, a smile as bright as the moon.

conversations with strangersHumans of Austin
March 31, 2015 by hipstercrite