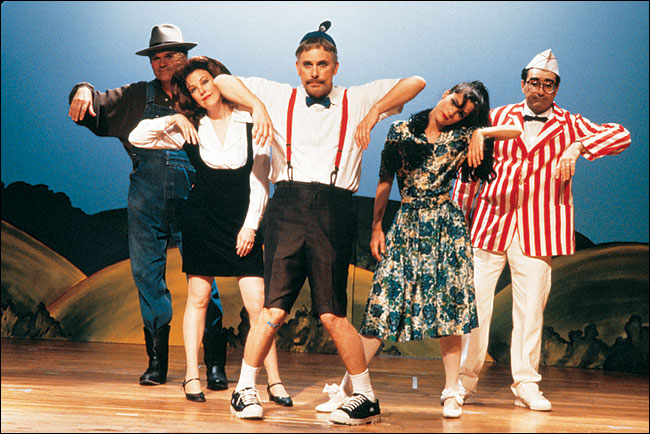 I wanted to take this moment to reflect on some of my favorite Guest characters. The beauty of every Guest character is that you can see a little bit of yourself in all of them. From the blissfully ignorant Libby Mae Brown in Waiting for Guffman to the misunderstood genius-stoner Mitch Cohen in A Mighty Wind, we’re all a Christopher Guest character at heart.

What is your favorite Guest character?

Corky St. Clair will forever be the loveable denial-suffering gay theater director who made us want, “I JUST HATE YOU AND I HATE YOUR ASS FACE!” become a part of our daily lexicon. A former choreographer and director in New York City, Corky moved to the sleepy town of Blaine, Missouri out of hopes of becoming a construction worker or “one of those guys that works on one of those high wire things, with the hard hats…and chaps”. But dear Corky couldn’t escape the theater, so he got back into directing, having directed one of Blaine’s most memorable shows, “Backdraft”, in which the theater epically burned down. Corky has a strong knack for malapropism. When discussing how the show “Red, White and Blaine” came together, Corky explained, “It’s like in a Hitchcock movie, you know, where they tie you up in a rubber bag and throw you in the trunk of a car. You find people.” In his off time, Corky enjoys buying his imaginary wife, “Bonnie”, pantsuits. Known to be quiet and stoic in real life, Guest has a talent for creating strong and detailed characters. Corky is still my #1 favorite character in any Guest movie. A little bit of trivia: the musicians of Spinal Tap (Guest, Michael McKean and Harry Shearer) wrote the musical “Red, White and Blaine”.

No image in a Guest film has been more striking than the lonely shot of Libby Mae pathetically fanning a tiny grilled chicken wing as she talks about going back to work at “the DQ” now that her dreams of stardom have been dashed. “I’ll always have a place at the DQ,” she says matter-of-factly. Libby Mae’s other dreams include going to the Big Apple to meet “some Italian guys” and watching TV out of her hotel room. The daughter of a prisoner, Libby Mae enjoys making Blizzards, cleaning her face with Vaseline and forgetting to close her mouth while chewing gum. Possibly one of my favorite Parker Posey characters in any of her movies, this character showed the actress’ talent for combining humor with heartbreak.

What would a Christopher Guest movie be without a extraordinarily flamboyant gay character? Scott Donlan is the proud owner of two show Shih Tzus with partner Stefan Vanderhoof (played by Michael McKean) and a whole lotta kimonos. Though Donlan is played with borderline offensive camp, the film redeems itself by portraying Donlan and Vanderhoof as the only normal and happy couple in the film amongst a sea of clueless yuppies, rednecks and blue collars. Possibly one of the most memorable scenes in Best in Show is when Donlan enters the Mayflower ring with more confidence and sass than any dog in competition. Memorable dialogue includes: “I knew a guy who had two members on the same body, dated him for about a half hour, got so exhausted. I’m sorry, go on, you were telling a story?”

Long before Sue Sylvester, there was Christy Cummins. Lynch’s debut into Guest-world was with this Type A ball-breaking closeted lesbian who deals with society only by intimidation. Cummins takes her job as the trainer of prize-winning Rhapsody in White (a.k.a. Butch) very seriously and is the most professional of the ragtag bunch at the Mayflower Kennel Club Dog Show. She doesn’t appear to have a sense of humor or much emotion, which is apparent when she divulges that her relationship with Rhapsody in White’s owner, the ditsy Sherri Ann Cabot (played by Jennifer Coolidge), is much like the dynamic her family had growing up; “I’m the mommy slash daddy, the taskmaster, the disciplinarian…and Sherri Ann is responsible for the unconditional love…the heart and the soul which was what my mom did. That was her role. She was there for the unconditional love… and it worked for my family, you know… until my mom committed suicide in ’81.”

Since their days at SCTV, Eugene Levy and Catherine O’Hara have always been phenomenal improv actors. Every Guest character they’ve portrayed, from the bumbling Dr. Allan Pearl in Waiting for Guffman to the former floozy Cookie Fleck in Best in Show, have been near perfect. It was difficult picking their best characters, but Mitch and Mickey are quite possibly their most meaningful and complex. Though A Mighty Wind is my least favorite Guest movie (I don’t acknowledge For Your Consideration‘s existence), the love story between songbirds Mitch and Mickey leaves the audience both humored and spellbound. What makes their story so special is that it gives the viewer an insider’s look into the story behind a love song. It’s obvious that these two deeply loved and still love each other and just like the audience in the movie, we wait with bated breath for their current lives to melt away as they kiss at the end of the rainbow.