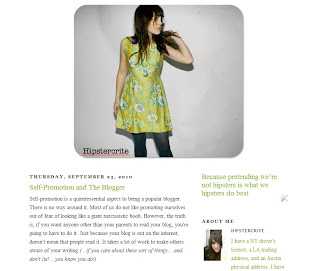 Self-promotion is a quintessential aspect to being a popular blogger. There is no way around it. Most of us do not like promoting ourselves out of fear of looking like a giant narcissistic boob. However, the truth is, if you want anyone other than your parents to read your blog, you’re going to have to do it. Just because your blog is out on the Internet, doesn’t mean that people read it. It takes a lot of work to make others aware of your writing (…if you care about these sort of things….and don’t lie!….you know you do!)

Yesterday, CNN featured an article written by the creators of Stuff Hipsters Hate about online self-promotion etiquette. Though an interesting article, it was short as sh*t and only listed three ways to be humble Internet braggarts. I thought I would elaborate a little more, based off of my own personal experiences as a reluctant egomaniac.

Tips on Online Self Promotion 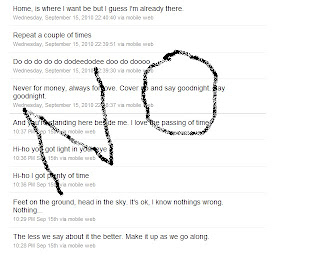 1.) No-no on Tweeting Song Lyrics– Don’t drink tequila and then tweet every single line to your favorite song, “This Must be the Place (Naive Melody)” by Talking Heads. Though an excellent song that many will agree with you upon, you will ultimately lose ten followers that get sick of seeing your name pop up every fifteen seconds with another song lyric. (This isn’t really an example of self-promotion, but rather what not to write online when you’re tipsy and feeling like David Byrne sings for you and you only.)

2.) Blog Accolades– Sharing blog acclaim is ok, as long as you do it in a self-deprecating manner. If your blog wins an award or is featured prominently on a website, it is a good thing to share with the world. This is in order to tell people that someone somewhere takes you seriously. However, it’s important to take the edge off of “Hey, look at me! I won accolades and you did not!” by writing something humbling, such as, “Wow! My blog actually won award that wasn’t given to me by my mother!” or “Huffington Post linked me on an article…they must have run out of material for the day.” 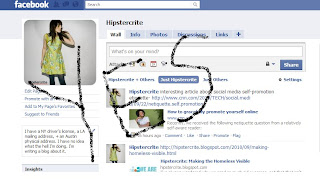 3.) Facebook and Twitter– The CNN article spends a lot of time discussing sending out emails and newsletters to make people aware of your blog/website/whatever the heck it is that you do. What is this? 2006? Blast that jazz on Facebook and Twitter (and when I say blast, I mean moderate and strategic posting). A good chunk of my traffic comes from Twitter. Twitter, which at one point I hated more than the way John Cusack now looks like a grandfather rather than a baby-faced bundle of nerdiness, has recently become an intricate resource in my blogging. Through Twitter, I’ve come across countless interesting blogs, bloggers, and other social media characters and hopefully they’ve come across me. Though an email blast to friends and family can never hurt, the same effect can be achieved on Facebook. Considering you’re probably FB friends with most of them already (unless you’re one of those people who refuses to become FB friends with your parents in order to keep them in the dark on your debaucherous lifestyle), why not just make a FB fanbook page and send it out to everyone? Or post a status message about your new endeavor?

4.) Stay True to Who You Are, But Save Us Some Details– I sometimes fear that I get a little out of control on the TMI front or the meaning-to-look-like-a-commonplace-personal-reference-that-I’m-hoping-makes-me-look-irreverent-and-witty-to-you-but-I-actually-spent-30-minutes-coming-up-with-it-status updates or tweets. You know what I’m talking about. The sort of messages that say, “I had a dream that I was dressed like Freddie Mercury last night and I don’t find it the slightest bit weird that I turned myself on” or “Hoping to find the Robert Mapplethorpe to my Patti Smith”. You know, those super hipstery, pop-culture referencing status updates. Let’s call them “Faux Liz Lemonisms” (And she is a hipster! Just a 40 year-old one!) Yeah, make sure you limit those. Based off of personal experience of getting sick of seeing my own status messages/tweets.

5.) Facebook Whoring– Now this is a tough one. You know, the person that has over 2,000 friends and they FB friend request you and you’ve never met them in your life so you’re not sure why you accepted the request in the first place, and one day you run into them and they’re squinting their eyes at you, and say, “I know you”, and you just stare back waiting for them to say your name and when they don’t, you make a little huff noise and walk away? That annoys the livin‘ crap out of me. However, Facebook has definitely drifted away from the strictly friend platform, to networking platform- and you fall into either camp. There is a unspoken war brewing between the two, so tread lightly.
…But whore all you want on Twitter. That’s what it was made for.

How do you feel about online self-promotion? Do you promote your blog/website? What tips do you have?