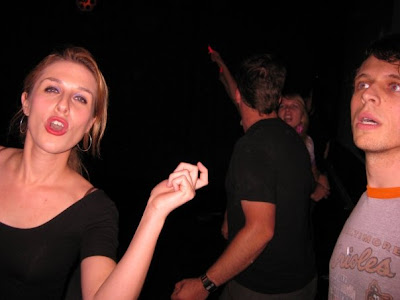 I just realized I ain’t a kid no mo!
And it took a 1987 sing-along at the Alamo Drafthouse to notify me.
Though the Atari and Dunkin’ Donuts commercials gave me a good nostalgic beating last night, it was the first few seconds of George Michael’s “Faith” music video that pushed me down into my seat. My smile faded as I watched the black and white jukebox fade into a long tilt up the ripped jeans of our impeccably groomed hero. I imagined myself at four years-old, sitting on the living room carpet watching this man shake his finely sculpted ass back and forth and thinking, “Now that is what a man looks like” (could explain some of my dating problems).
It was at that moment I realized I was a long ways away from being a child anymore.
Up until that moment last night, I was movin’ and groovin’ to the créme de la créme of 1987 music videos.
Michael Jackson’s “Bad”
White Snake’s “Here I Go Again”
Bon Jovi’s “Wanted Dead or Alive”
After each song finished, our hearts would skip a beat waiting for the next music video to pop up. What would it be? Pastey-armed Bono in a leather vest? Adorable Whitney Houston pre-coke phase? Smoldering Billy Idol in full blown coke phase? The next video would appear on the screen, a moment of silence as recognition set in, then full crowd explosion of laughter, cheering, and dancing.
Then there was me.
In the very last row of the theatre, wearing a black tuxedo jacket in a weak attempt to look like Blair in “Less Than Zero”, standing there, dancing anxiously, my hands clutched to my chest. As each song played, a dusty layer of blanket would lift away from the vault of childhood memory, until all that was left when “Faith” came on, was an exposed open container of the past twenty-two years that stood in between where I stood right then and the day I sat in front of that television screen bewildered by George Michael.
I look at this picture of me and I see a woman’s body and face.
And I wonder where the hell I went.
April 24, 2009 by hipstercrite