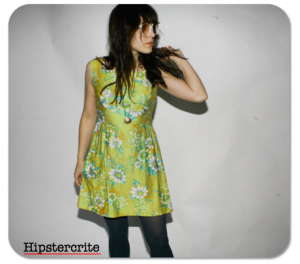 I have a NY driver’s license, an LA mailing address and an Austin physical address. My biggest fear is that I’ve been summoned for jury duty in one of these states. (Update: I no longer have the LA mailing address. I hope I’m now in the good graces of Austinties who hate Californians. Update to update: I now have a TX license. I’m now a Texan…good God.)

Here, this guy said it best, “Hipstercrite bridges the gap between blogging about yourself and blogging about pop culture. For all you English Studies people out there, I’ll translate that: “She transgresses the socio-political boundaries between the Cultural and the Personal”.

That sounds pretty good to me…and no, I didn’t write that in the third person.

Hipstercrite, a.k.a. Lauren Modery, was  born in Central New York during the Reagan administration. She enjoyed wearing suits and fantasized about being middle-aged Jewish men as a child, most notably four out of the five Marx Brothers and Rod Serling. Her childhood obsession with film led her to LA at the age of 20, but like many naive cinephiles who move to Hollywood, she quickly learned (quickly being five years of denial and drinking) that the film business was not for her. Having lost all her creativity and tired of living the plot to Swimming with Sharks, she jumped in her car one day in 2008 and drove to Austin, Texas, where she knew no one, had no job lined up and only $500 to her name.

It was the best decision she, er, I, ever made. Why the hell am I talking in the third person?

Loves Her Gun, a film I co-wrote and co-produced, premiered at SXSW 2013 and won the Louis Black Lone Star award. The film stars Trieste Kelly Dunn and Francisco Barreiro and is directed by Geoff Marslett. Salon, the Village Voice and Variety all liked the film, and the New York Times chose it as their Critic’s Pick. This will probably be the highlight of my life.

By day I work as a copywriter; by night I freelance and think about Jeff Goldblum. A lot.

I’m currently working on a book proposal about train travel. (And it’s taking me forevvvvvver.)

Please check out more of my writing work here.

And you can email me at laurenmodery at gmail dot com.