Last year I co-wrote and co-produced a film called Loves Her Gun.

Hallelujahohmygod, the film is finally finished minus a few sound and color correct tweaks.

Making a movie is both an exhilarating and diarrhea-inducing experience. Everything from writing the script, shooting the film, editing and submitting to festivals is one giant roller coaster of hair loss, laughter, tears and wide-eyed stares.

Geoff and I are currently creating an Indieagogo campaign for post-production costs because we loooooove asking people for money. LOVE IT! There is nothing better than sharing the living shit out of our crowdfuding page asking people to donate to our poor asses. Nothing. It makes us feel the opposite of desperate.

Wanting to make the BEST CROWDFUNDING CAMPAIGN THERE EVER WAS, I researched articles that recommend the best steps in earning your friends’ dough.

Articles will tell you that these steps are most important when creating a crowdfunding page:

2.) Create a super slick video; not only will this wow viewers, but might earn you a spot on your crowdfunding platform’s homepage

3.) Offer enticing perks to your donators

4.) Do a media push to friends, family and blogs/websites (because cold emailing a blog to share you crowdfunding page is not awkward)

All of these suggestions are good and wonderful, but I found that the key to really making a kickass Kickstarter campaign is humor, duh.

I came across this Kickstarter campaign via friend of a friend and it was the first time I nearly contributed money to a campaign I had zero personal attachment too.

This campaign, now expired, was post by aspiring screenwriter Michael Mann (not that Michael Mann, though this Michael Mann offered $100 perk where he would autograph a photo of director Michael Mann for you), for his project Plan B.

As you will see, Michael Mann doesn’t adhere to any of the suggestions above. Not only does he not have a slick video or enticing perks, but he doesn’t even clearly have a project goal. Donators really have no idea what exactly they’re donating to other than a script based off Lifetime commercials.

You can read the entire campaign here, but here is the bulk of it below. Check out the link so you can read his incredible perks like “an uninvited and passionate open mouthed tongue kiss” at $1 and “a firm handshake with steady eye contact that your father never gave you” at $25.

Side note- Mann exceeded his Kickstarter goal by nearly $800.

Plan B by Michael Mann 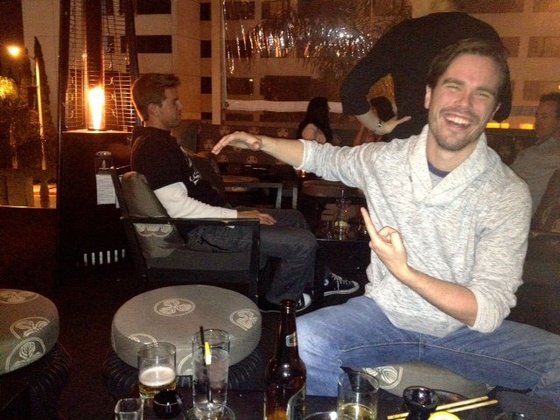 Oh hey there friends!  Thanks for stopping by my “awkwardly desperate plea for donations towards a project that will most likely create zero profit”, or ADPfDTaPTWMLCZP for short.

In a concerted effort to delay becoming an adult with a real job, I am attempting to kickstart (see what I did there?) my career by producing and directing some short films that I have written.

The first short I want to direct is called “Plan A”.  It is a parody of the Plan B commercials that are on Lifetime from 2 to 6 in the morning.  If you would like to read the script contact me at [email protected]

The idea was first developed by a young actress named Beth Lepley, who, in turn, asked me to write a script.  We are now in the stage of planning called preproduction in which we choose locations, hire crew, and plan a shooting schedule.

While most of the cast and crew, myself excluded, will be working for free; I am hoping to raise some funds to pay for locations (hookers) and equipment (drugs).

Now you may be asking yourself, “(insert your name here), I am a high powered (insert occupation).  Why should I, (insert name again,) give Mikey Mann my hard earned money just to enable his naïve, pie in sky, dreams of someday possibly being a neurotic, out of work and suicidal screenwriter?”  Which is, in all honesty, a valid, but pretty harsh question.  Take it easy man, I am just trying here.

Here is the trajectory for the project.

In all seriousness, starting a career in film is something about which I am extremely passionate.  Over the last few years, the internet has become an amazing medium for aspiring writers and directors to gain notice from the industry.  People in all aspects of television and film production have started from a simple youtube clip or twitter feed, and I feel with my past experience and the talented people I have around me, I can create work that will get my name out there.

In conclusion, I think the homeless guy on my corner put it best, “Just give me some money please.  Come on man.”