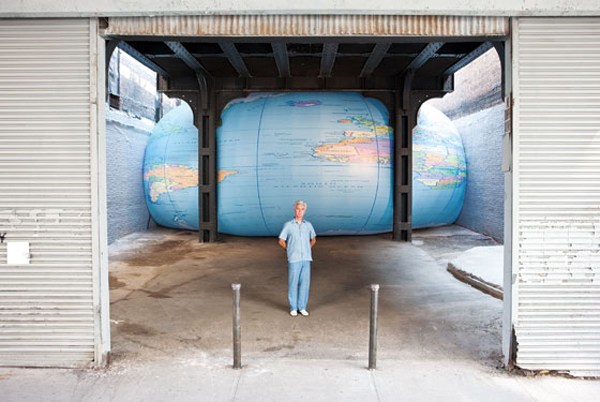 “Imagine for a moment the following grouping: David Bowie, the former Clash bass player Paul Simonon, Rolling Stones guitarist Ronnie Wood and Bon Jovi’s drummer Tico Torres. What do you get? Not just a creaky rock super-group – but also a shockingly bad group exhibition. For all four musicians, along with the likes of Paul McCartney, Iggy Pop and David Byrne, fancy themselves as artist and are more than happy to display their wares in public,” writes Ratnam.

I can’t speak for the other musicians/artists, but I know for one that David Byrne is one of the busiest thinkers, creators and artists out there.

David Byrne went to Rhode Island School of Design, honed his chops in East Village late 70’s, has written numerous pop, classical and Latin records, has written and directed a movie, has written multiple books, has designed bike racks, won an Oscar- and the list goes on and on.

If David Byrne doesn’t optimize the word “artist”, then who does?

David Byrne’s work has never been a display of genius- though maybe one can argue that his discography is pretty impressive. He is no Da Vinci or Picasso or Van Gogh. What David Byrne is good at is making his audience think outside the box. Think differently about the world we live in. David Byrne sees the norm in a unique light and he wants to share that with his audience. His film True Stories has slowly but surely worked it’s way up to cinematic masterpiece status with Byrne’s equally subtle and flamboyant take on Texas life and culture. His songs are both abstract and relatable. “Letting the days go by, let the water hold me down“- what does it mean? Who the hell knows, but deep down we understand.

What else makes David Byrne an artist? He’s never given up. He’s always evolving and trying something new. Sometimes they’re stinkers and sometimes they’re not, but he keeps trying.

I slightly understand where the writer is coming from- it’s easy to attack celebrities when they try to do something other than what we’re used to them doing, but celebrities are creative people. Why should they ONLY be good at one thing? Can’t they be musicians AND artists AND actors AND writers? Why do we have to attack them if they go outside their box? Unless it’s Heidi Montag or Paris Hilton recording albums- but they’re not masters of any craft to begin with.

Ratnam states, “Of course, it’s unfair to expect rock-stars to be any good as artists. They haven’t been through the filtering process of the postgraduate school and the commercial gallery system that gets rid of 98 per cent of prospective artists. Instead, most have been to art school at undergraduate level but made it no further.” So, just because you haven’t gone to art school at the graduate level makes you not an artist? I’d say it makes you silly for spending that much money on an art degree! To me, hanging out with the artists of 70’s East Village is priceless compared to an art degree. Meeting thousands of artists, creative people and human beings through your decades-long career of touring the world as a musician and having countless life experiences definitely puts you ahead of what anyone can teach you in art school.

What do you think? Do you agree with Ratnam? Do you think most musicians are artistic hacks?