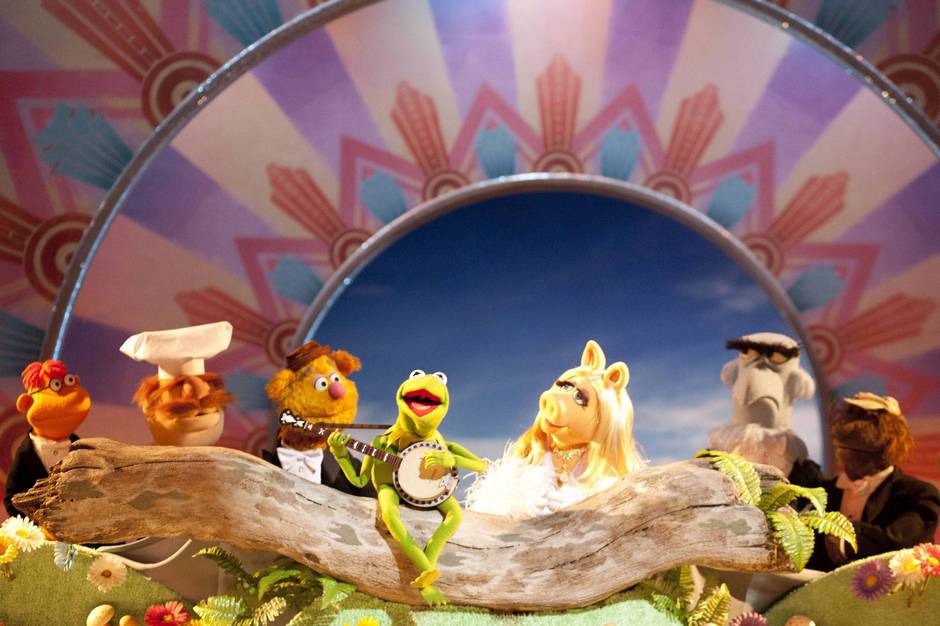 Fast forward years later, Gary decides to take his girlfriend of ten years, Mary (Amy Adams), to Los Angeles. Knowing how much Walter has wanted to meet the Muppets, they take him along for the trip. Their first stop in Los Angeles is the Muppets Studio where they sadly discover it in a neglected state. Walter peeks into Kermit’s old office and stumbles upon greedy oilman Tex Richman (Chris Cooper) planning to tear down the studio to uncover the oil underneath. He will acquire the studio in a few days based off a loophole in the contract Kermit signed for the Muppets franchise. Unless The Muppets can come up with $10 million before the deadline, the property goes to Richman. Armed with this knowledge, Walter tells Gary and Mary that they must find Kermit.

The trio discovers Kermit in a forgotten mansion in Los Angeles. They tell Kermit the news, but he is hesitant to get involved. You see, The Muppets haven’t performed together in years. It’s only after Walter tells Kermit how much he has inspired him that Kermit decides to get the gang together for a fundraising telethon. Gary, Mary, Walter and Kermit set out across the world picking up the gang: Animal is in anger management class with Jack Black, Miss Piggy is editor of French Vogue, Gonzo is a plumbing tycoon and Fozzie Bear plays in a Muppets cover band in Reno called The Moopets. The gang gets to work repairing the old Muppets theater and rehearsing sketches for the telethon. Throughout this time, Gary questions if he’s a Muppet, Walter questions if he’s a man, Kermit and Miss Piggy work on their broken relationship and Fozzie makes a slew of bad jokes.

There is a lot of singing and dancing in The Muppets. The songs are catchy and fun and like the three year-olds sitting next to us, makes you want to get up and shake your butt. There is also a lot of self-referencing jokes. When Gary arrives at Mary’s school winded from a city-wide dance number, he tells Mary that he’s exhausted from the random choreographed dance number he was just in. Characters makes jokes about obvious plot points and the length of the film. The nostalgia-overload on the film is both exhilarating and emotionally-draining and I found myself crying multiple times throughout the film. When Gonzo, the wealthy plumbing tycoon, is visited by Kermit and Fozzie he is at first dismissive. Then Camilla reminds him that he has been waiting for this moment and Gonzo rips off his business suit to uncover a latex leotard underneath. He states that he’s been wearing it under his suit every day, hoping that this day would come. Then he dives off the building. Of course I started bawling.

The scene that was particularly emotional is when the gang performed The Muppet Show for the telethon. As soon as the theme song came up, I started crying some more. When they all sang “The Rainbow Connect” I started drooling and losing vision.

I guess my only complaint, if one can call it that, is that the innocence of the Muppets was gone from the movie. The characters were older, washed up versions of themselves which was difficult to imagine (though they looked no different- except that they now have legs). The self-referencing jokes are fun, but sometimes took you out of Muppet fantasyland. It reminded me that the Muppets I was watching were in no way Jim Henson’s Muppets I grew up with. When I said this to my boyfriend, he pointed out that the movie is more in the comical style of the Muppet Show rather than the films and he is right. It’s a little edgier, a little more adult, but still great for the entire family.

All in all the movie is a fun time and a must-see for every Muppets fan of any age.