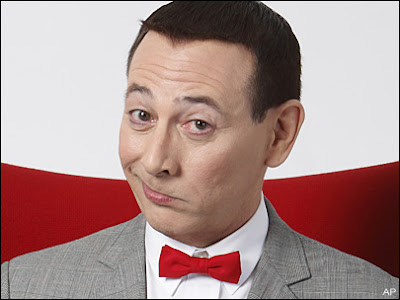 It’s no secret that I’m kind of in love with Pee-Wee Herman. Kind of meaning that I might name my firstborn King of Cartoons. Pee-Wee’s Big Adventure is and will forever remain my number one favorite movie and there may or may not be times that I dress in a tiny gray suit and dance to ‘Tequila’ around my house. Alone. With a bottle of tequila.

With that being said it’s greatly tickling my nether regions to know that Paul Reubens will be at this year’s SXSW debuting his new film, The Pee-Wee Herman Show on Broadway (Sat. March 12th 4:00PM at the State Theatre). Unless you’ve been living under Floory, you will know that the character Pee-Wee Herman recently made a comeback with the Pee-Wee Herman Show which first debuted in LA in 2009 and then made it’s way to Broadway. The sold-out shows and talk show appearances cemented the fact that America still loves Pee-Wee and we’re anxious to have him back. Some more so than others. Some waaaaay more.

If you haven’t heard, Paul Reubens has resurrected our lovable little Pee-Wee Herman from the dead. That’s right. Everyone’s favorite man-child is back on-stage with “The Pee-Wee Herman Show” and better than ever. An updated version of the acclaimed 1980 Roxy Theatre stage show of the same name, the four week only event at Los Angeles’ Club Nokia Theatre has won over critics, fans, and newbies alike. The success of the show has helped fuel rumors of a new Pee-Wee movie or two in our future.

Watching Reubens on Conan the other night made me realize that our Pee-Wee, my Pee-Wee is back (though I’d like to think that he never went away, but rather changed his name to El Pee-Wee and worked as a bartender in a Costa Rican coastal resort for a little bit ).

In honor of the man who encouraged me to wrap tape around my face and steal my mother’s platform shoes and dance awkwardly for strangers, I present “Everything I Always Needed to Know, I Learned From Pee-Wee Herman”:

1.) Be Green– Not only should your main mode of transportation be a (freakin’ amazing fire engine red!) bicycle, but you can practice self-sustainability by growing cocktail weiner trees.

2.) Be Thrifty– You can save money by creating your own popsicles with juice and ice cube trays. Or by wearing the same suit every day for the rest of your life.

3.) Don’t Take Rides From Strangers– Accepting rides from frizzy haired truck drivers will only leave you abandoned on route 40 with underwear stains.

4.) Decorate! – Don’t listen to your friends when they suggest falsetto speaking flowers is passé. Or that styling your house to look like Liberace accidentally ate Howdy Doody and regurgitated him back up on the walls is over-the-top.

7.) Abide By The Law– Cutting the “Do Not Remove” tag on mattresses only leads to life on the lam.

8.) Be Prepared– You’ll never know when that trick gum or boomerang tie will come in handy.

9.) Know Your Friends– Anyone who wears a monogrammed romper or whose last name is a cold cut is not to be trusted.

10.) Be You– So what you’re a man-child and get more excitement from inanimate objects that interacting with human beings? Don’t go changing.

Glad you’ve made a comeback (AAAHHHHHHH!)