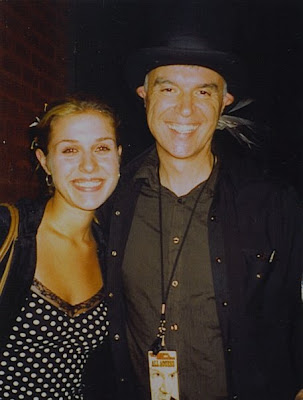 When I get stressed out, much like a dudebro drunk on whiskey, inspiration and creativity is not something that comes easily.

In fact, my brain just completely shuts down. During these times, I often find myself standing wide-eyed and dumbfounded when people are talking to me. You may even find me hovering in the grocery store staring at the same three shelves of salad dressings for about fifteen minutes, completely immobile. This may have more to do with the fact that there are now 400 types of salad dressings to chose from when grocery shopping and not a temporary neurological malfunction.

I’ve accumulated a lot of idols in my years. Some have left me- Beetlejuice, Elton John circa 1974, Dana Scully. Some have stayed-Woody Allen, Pee-Wee Herman, Frank Zappa. Some have joined me only recently on my journey through life- Freddie Mercury, Prince, and Amy Sedaris.

And yes, I know there are very few women on the list. You don’t think I don’t know that? You don’t think I don’t have it on my list of potential questions to ask my therapist if and when I ever get one? All I can say is that I’ve come to the conclusion that I’m an adorable tiny gay man in a 27 year-old female’s body. I like fashionable men’s clothing, Cher and Liza Minnelli, and I just like men in general.

If it weren’t for my idols, I don’t think I would be where I am today- which is sitting on my couch watching Purple Rain and dressed like Prince.

Ever since I was a little girl, I’ve had a habit of trying to embody my heroes. Back home is an entire shelf devoted to VHS tapes of me as Rod Serling, Stevie Nicks, Annie Lennox, and various members of The Kids in the Hall. Donning gigantic Jewish eyebrows made me feel as though I’d gain a fraction of Serling’s grace for storytelling. Twirling around in the backyard with a half moon tambourine I forced my mother to buy me made me feel as though I was a little closer to staring into Lindsey Buckingham’s deep blue eyes. Little has changed since those days. As many of you know, for Halloween this year, I glued chest hair and a mustache to my skin in order to become Freddie Mercury. This simply wasn’t a costume, but a day for me to envision myself as a Persian rock star with an overbite as impressive as his voice.

All of my heroes above have brought me inspiration and entertainment through the years, but there is one man in particular who has been my shining example of who I want to be. He has been a renown musician, artist, filmmaker, writer, and photographer for the past four decades. He is always changing, always trying something new, and keeps on going whether his new endeavors work or not (I’m just going to say it, David, Rei Momo sucked ass). Since I was sixteen years-old and first saw Stop Making Sense, David Byrne has and always will be my artistic hero. Whether he’s making songs about buildings and food, films about Texas,  bike racks in New York City, turkey Jell-o molds, or buildings that play music, Byrne just keeps ’em coming. I try to remember that when I’ve reached a creative road block- just keep it going. Keep those wheels churning and don’t necessarily think that what you’re creating could be viewed as poop. Or a Afro-Cuban/Hispanic/Brazilian album sung by an extremely dorky white dude.

This post has been extremely difficult to write. I’m not happy with it. I don’t like where it is going and I don’t have an ending for it. Even thinking about David Byrne right now is not helping me to bring this post to a point or a conclusion. I guess if I were to channel Byrne I would just end the post right now without a

Who are your creative idols?