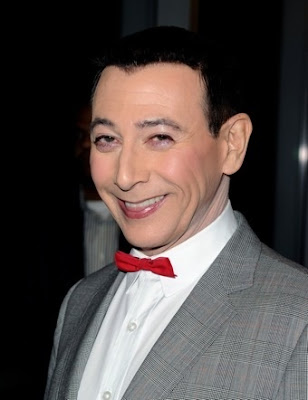 It’s B-List Actor Thursday again! A day to celebrate the true talent that gets overshadowed by the hacks in A-list.
Being a child of the 80’s, Pee-Wee Herman epitomized my early introduction to unconventionality. To me, Pee-Wee represented confidence- feeling comfortable in your own skin…or tiny suit. He did his own thing, did not care what people thought of him, and though enjoyed interacting with others, found solace in his own world. As years went on, Pee-Wee took on a secondary significant role as a symbol of my childhood. When I watch him now, I recall the days I would sit in front of the television mimicking the “Tequila” dance over and over in my mother’s platform shoes. His movies and TV show now have dual entertainment purposes- I remember all the scenes and jokes that struck me as a five year-old- how they made me feel- but now as an adult I understand the irreverence, the eccentricity, and the reminiscence of a time long past. Just as Pee-Wee served as a nostalgia gatekeeper for my mother and the 1950’s, he is now serving the same purpose for me.

Luckily, I was raised in a pro-Pee-Wee Herman household. My mother to this day loves Pee-Wee nearly as much as I do and we both stop what we’re doing if Pee-Wee’s Big Adventure or “Pee-Wee’s Playhouse” comes on the television.

Unless you live under a rock, you will have noticed that Pee-Wee Herman has recently made a resurgence. After a successful revival of his 1980 stage show, “The Pee-Wee Herman Show“, in Los Angeles, Reubens brought the show to Broadway where it is currently running. Reubens is also taking every media opportunity to get the PW name back out there, having appeared on everything from WWE to daytime and nighttime talk show to Sturgis Motorcycle Rally. If that weren’t exciting enough, Judd Apatow is attached to produce the next Pee-Wee Herman movie.

Of course being a nearly life-long Pee-Wee fan, I’m happy that our lovable little man-child is back. However, now an objective adult, I find it inspiring that a man who was unjustly chastised, pushed into hiding, and forced to kill off a character that he loved so dearly, is able to come back better than ever… and all at 58 years old!

The beauty of Hollywood is that everyone has second chances…and third (Robert Downey Jr.)…and fourth (Charlie Sheen). The fairy-tale ending is viable if the individual wants it badly enough. Though it may have taken many years for Reubens to feel comfortable bringing PW back and for America to accept him, the amount of positive response upon his resurrection has proven that PW has always had a special place in our hearts. My peers are now having kids of their own and introducing them to his movies and television show and the homophobic, staunch conservative assholes who fought against him before…well, no one really gives a shit what they think, do they?

To Paul Reubens- for encouraging us to be who we are and to never give up fighting.

Do you like Pee-Wee? Was he an important part of your childhood?
November 4, 2010 by hipstercrite