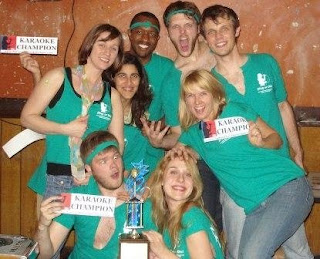 I’m not sure if you know this about me, but I’m a karaoke champion.
It’s true.
In fact, I’m a national karaoke league champion.
Well, me and my team, Steve Perry’s Excellent Adventure.
Granted it’s only called the National Karaoke League though it’s not national at all, it all take place in Austin, Texas, and we were in last place and magically came in first during the finals round much to everyones’ chagrin, but we’re national champions nonetheless!!!
If you ask me about karaoke, or even if you don’t ask me about karaoke but ask me something completely unrelated, I will tell you share with you my advice on the ancient art.
Being a master at karaoke, like myself, is not easy. It took years of being a sibling-less child with a mirror as my only friend to get to where I am today.
But don’t you fear!
Below is a list of karaoke “do’s and don’ts” that though may not get you to the coveted position I am in today, it will certainly put you on your way.
How To Become a Karaoke Champion
_______________________________________
1.) Sing crowd favorites– “Sweet Caroline”, “Don’t Stop Believin'”, “Bohemian Rhapsody”, “Total Eclipse of the Heart” are all EXTREMELY popular amongst the drunk- if you care about becoming friends with drunks and not having your tires knifed by a karaoke DJ.
2.) Nothing obscure or slow– If you really do care about becoming friends with drunks, certainly don’t sing a slow or obscure song. You’ll become known as that person that brought down the mood and forced everyone do some unwanted self-analyzing while listening to your version of “Creep”.
3.) Be engaging– Engage the audience- nobody likes watching you stand like a deer about to get hit by a speeding semi up there on the stage. Have a Rumplemintz, heck, have ten Rumplemintz, and then get up there and take off your pants. Lean down really close to some dude and whisper in his year. Make his girlfriend uncomfortable. You know what to do (see below). 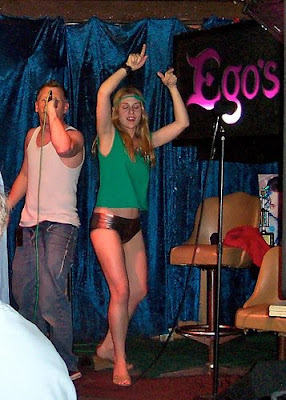 4.) Don’t do the finger pointing dance seen above.
5.) Sing ironic songs– Irony is not lost amongst the drunk- don’t give them such little credit, jeez. Singing Creed or Nickelback or being two dudes dressed up as T.A.T.U. and singing “All The Things She Said” to one another does not go unnoticed or unappreciated. 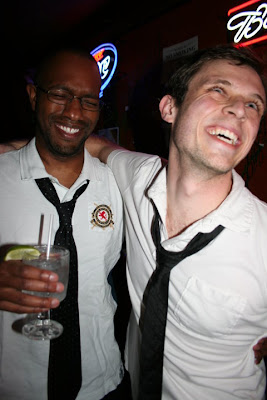 6.) Give the crowd a boner– If you’re a girl and you sing anything by Metallica, Guns n’ Roses, or AC/DC, and sing it well, you will have instantly given the entire bar a collective boner. On the same token, if you’re a dude and sing anything well you will have also given the bar one giant boner.
7.) What to drink?- I come from the mindset to sing karaoke 100% sober. That way you can be totally immersed in your misery of singing in public. It’s the only way you’re going to learn, little one.
8.) Don’t try– If you don’t look like, sound like, or dance like Prince or Michael Jackson, don’t even try it. No amount of alcohol will save you from the devastation you’ll create. You will fail epically and live with that failure for the rest of your life (unless something happens like the scenario at the bottom of this post). Every time you attempt to shame either man, MJ sheds a tear from heaven that collects in Prince’s tub of purple rain where he drowns small rabbits. Do you want to be the cause of the killing of a lot of rabbits?!
And supplementary…
Land a boyfriend– Singing Michael Jackson to a bunch of people wearing cowboy hats, then shouting, “Why the F**K are none of you singing along to Michael Jackson!? He died YOU KNOW!” and then throwing your microphone down on the ground and walking away will always get you the guy.
July 27, 2010 by hipstercrite