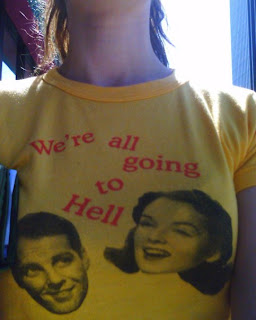 John the intern is adorable. He is in his third year at journalism school and takes his job here very seriously. I’m sure he had three tasks today; stock the fridge, take out the mail, and be on the lookout for when Rob gets back from lunch so we can surprise him. And I’m sure he accomplished all three with admirable conviction.

The two interns, John and Molly sit at make-shift desks in opposite corners of the office. I made their desks myself out of saw horses and doors and one can read about my little DIY project “How to Make a Desk on a Budget” in issue #4 of our magazine. The only two enclosed offices are Rob’s and Marty’s. I should have an office considering I’ve been with these guys since the conception of Sin Magazine, but until we can afford a bigger office, I’m stuck out in the open. Marty’s office has four walls and a door and a view of Prospect Park. My office has three walls, no door, and a view of our intern’s butt crack when I turn around. Sometimes I’ll bring blankets into work and turn my cubicle into a fort and demand that everyone say “the secret word of the day” to enter. The only good thing about my cubicle is that it’s in direct eye sight of Marty’s office. When I’m bored, and Marty is on the phone, I will position myself so that I’m staring directly at Marty. He’ll try to shift his chair out of my aim, but to little avail. He had to buy one of this remote control door shutters because of me.

I open my desk drawer and pull out the mixed CD I made for Rob so I don’t forget. I know when Rob’s birthday is. It’s October 13th. I’m always good at remembering people’s birthdays months ahead, but not the day of. I put a lot of time and energy into making their gift. When the date actually arrives, I completely forget, then notice about a week later their gift sitting in my desk drawer. It has nothing to do with forgetting their birthday, but everything to do with forgetting what day/month/year it is. I often find myself writing the date 1985 or 1992 on documents. I was five in 1985. Must have been a great year.

Rob is technically my superior, but considering I a.) was friends with him before we started working at Sin Magazine and b.) I know what kind of faces he makes during sex, there isn’t much I find superior about him. I make sure and let him know that. He then reminds me that he can fire me at anytime. Then I gladly remind him that I have nude photos I got him to send me one night while he was super drunk and lonely while backpacking in India and that I will blow them up and put them in the front hallway at work.  He then mentions all the dozens of naked pictures I’ve emailed/texted him over the years that he could blow up. We then realize that our entire office would be filled with blown up shots our crotches and the idea just seems gross.

So, this year I was thinking of giving him a framed picture of his balls for his birthday, but I thought that wouldn’t fly well with the boyfriend. Most of the time Timm acts indifferent about me, but the few times he’s felt threatened, I had to deal with him disappearing for two days, then drunk dialing me from his bandmate’s house crying and asking me never to leave him. I then tell him that the stranger who winked at me on the sidewalk meant nothing and I go pick his ass up. These are the times we have the best sex, where he thought he lost me when really along, I was right in front of him.

Rob’s CD has been ten years in the making. I’ve made mixed CDs for him before, but this is a milestone. An epic mixed CD to end all mixed CDs. Our friendship has endured: two sexual relationships, two break-ups, three drunken hook-ups, one back shaving, several wrestling matches, and innumerable late night calls drunk, crying, and wondering where shoes went.

It’s a double disk and starts with the song that played when we first met. We were at some lame freshman party at college. All I remember about the party was that it was dark and I wanted to be home watching “The X-files” instead. I went because my roommate dragged me along and constantly made me feel like a loser for sitting in the common room on Friday nights with two or three dudes with over-sized heads that wore black t-shirts, hemp necklaces, and chains on their jeans. Somewhere in the midst of the “Now That’s What I Call Music” CD that some sadistic person put on repeat, a Talking Heads song came on and I nearly shat myself. I left whatever conversation I was having with someone I probably didn’t really give a shit to talk to, and walked over to the speakers. I went into instance David Byrne trance and started singing all the words to “Psycho Killer”. This is where Rob comes into the picture. I notice a tall, somewhat gawky kid with thick bangs heading my way. I closed my eyes and thought hopefully we won’t intrude on the only four minutes of solace I’ve had at this whole party.

Shit. Maybe if I keep my eyes closed, he’ll vanish.

I open my eyes. He’s wearing a “Pixies” t-shirt. His bangs don’t look as disproportionate to his head as I thought.

I close my eyes again.

“Hey, want to go outside and talk?”

“Not really. I’m listening to my song.”

I crack open an eye and notice that he’s gone. My Mom would have said that was bad form. That I would never get a boyfriend by acting that way. I didn’t want a boyfriend. I wanted to listen to Talking Heads.

He was kind of cute though.

When the song ended, I hunted him down. He was sitting on the patio talking with some of the kids in my drawing class.

I walked up to them and punched Rob in the shoulder.

“Then I’ll tell everyone here that you dress up like Robert Smith and dance around your dorm in your underwear.”

“Naked. I dance around naked.”

That was it. With that statement I decided this guy wasn’t too bad and we hung out til 2AM that night and have been friends ever since.  Except for the year after he dumped me and I stopped talking to him, then we got back together and I dumped him out of spite and he stopped talking to me. That was just one year though.

The rest of the songs on the CD represent various milestones after that: the song I listened to on repeat when we first broke up (“Precious Things” by Tori Amos), the song we listened to on repeat up the entire California coast (“Don’t Stop Believin'” by Journey), the song we sang at the bar the night we celebrated the first issue of Sin Magazine (“Purple Rain” by Prince). There are 40 tracks in total. He better freaking appreciate this.