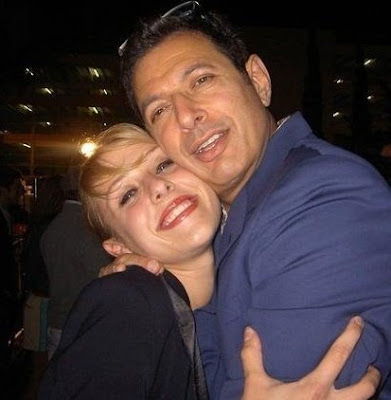 Dr. Emmett Brown
Dr. Egon Spengler
Dr. Ian Malcolm
What do these men all have in common?
I wanted to marry all of them between the ages of 4-10.
I had completely forgotten that at one point in my young life, I heartbreakingly loved all these men. I was only reminded of it recently while sitting at the doctors office, maybe or maybe not reading one of those articles in Cosmopolitan, titled, “What your type of man says about you.” I never read such nonsense, but I was feeling particularly nonplussed about my relationship status that day (I’d even settle for a “It’s Complicated”) and thought maybe it would shed some light on why I pick men that may or may not have the same personality traits as my free spirit father (free spirit= flew the coop when I was six).
I realized that I wasn’t exactly sure what my type was. The men I seemed to go after typically fail me (f*ck YOU, artsy bearded musicians!) and though I thought I liked men who look like Lindsey Buckingham circa 1977, the past four guys I went out with were all blonde-haired David Cassidy types (one of them was so pretty, that I mistook him for a woman in the shower and that was the day I realized I wasn’t gay). I decided to get back to basics and really concentrate on my pre-pubescent lovelorn angst.
At four years of age, I was hopelessly in love with Dr. Egon Spengler. At seven years of age, I was enthralled by Dr. Emmett Brown. At ten years of age, I was ga–ga over Dr. Ian Malcom (his action figure shared the pillow over from mine).
It was at the cafe that I had an “A-ha!” moment.
“I like fictional nerdy scientists!” I said out loud!
Oh.
Great.
I like fictional nerdy scientists.
I had to analyze this. Here is what I came up with…
DR. IAN MALCOLM– Ok, so Jeff Goldblum I get, even though most people think I’m crazy for still finding him attractive. Well, if you once had Jeff Goldblum’s boner pushed up against your thigh, you’d fall in love with him too!
I mean, look at this picture of Ian Malcolm? Dr. Malcolm knows he’s sexy, that’s half the charm. He looks like he’s waiting for the dinosaurs to come and get him so he can make sweet Goldblum love to them (or at least push his penis up against their thighs).
The only thing is, I get the impression that Malcolm would hit on anything near him that has a vagina (they cut the scene out of JURASSIC PARK when Malcolm winks at John Hammond’s twelve year-old granddaughter). Sounds just like somebody else I know (ahem…Jeff Goldblum). 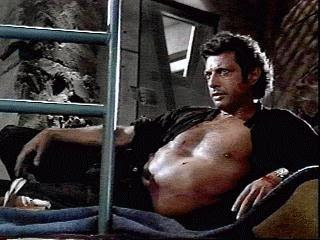 DR. EGON SPENGLER– Ok, I kind of get this. I mean, it would make more sense if I was attracted to the cartoon version of him (see below), which was some Arian body builder type.
I really just think it was the Eraserhead-style hair that I dug.
I mean, he had ZERO personality. He was the most socially awkward New Yorker that ever lived. He could converse better with a possessed accountant than the chick that worked in his office. He collected spores, molds, and fungus. He SLEPT with a strange, bubble gum shampoo looking like substance found under the streets of New York City.
Yeah, the more I think about, I have to reexamine my interest in him… 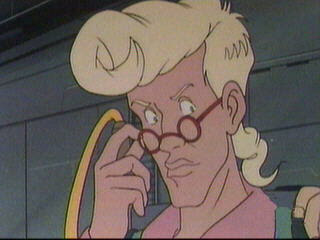 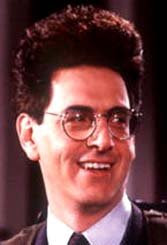 EMMETT “DOC” BROWN– Ok, this I don’t get AT ALL. He was a f’ing nut job, that’s what he was. And this was the dude I had the thing for the most! I used to write my name as “Mrs. Doc Brown” everywhere.
I mean, I was combing for pictures of Christopher Lloyd and there is nothing that even resembles sex with him. He’s looked like somebody’s grandfather since he was born. Maybe it was his enthusiasm and passion for making a novelty stainless steel car into a time machine that got my blood pumping, I don’t know… 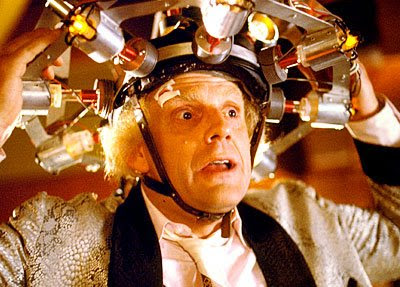 I sat back in my chair and digested all those forgotten feelings that I just unearthed.
Maybe this will explain some things.
Maybe I was meant to be with a smart, big nosed, categorizable idiot savant.
Maybe I should just stop fighting it and give in to what my inner child has always wanted.
Ok, so if you’re a Jewish-looking scientist who finds dinosaurs, ghosts, or time travel titillating …give me a call?
January 14, 2010 by hipstercrite