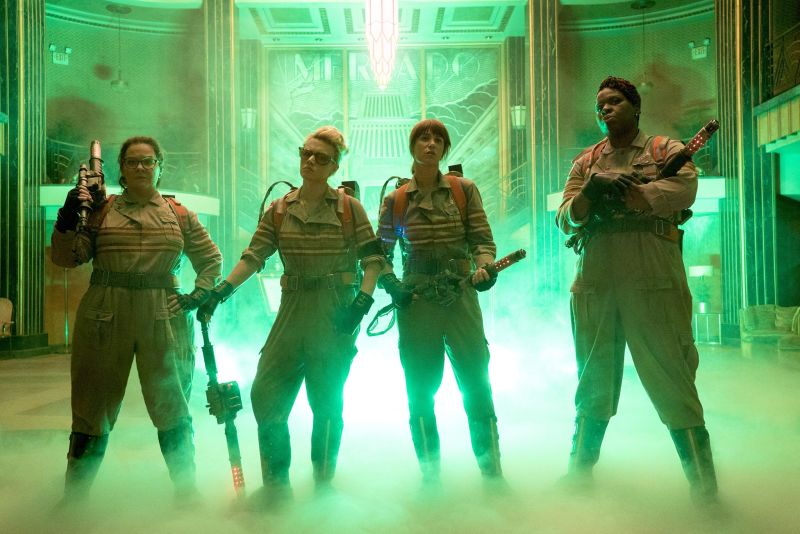 FEIG: I think it’s the death throes of the old guard. It makes a smaller minority scream louder, because they’re losing their grip on the cliff. I understand, if somebody was remaking “The Godfather,” I would be like, “Wait a minute.” But when everybody’s like, “It’s a cash grab”? Everything ever made in Hollywood since the beginning of time is a cash grab. That’s why the original “Ghostbusters” existed. It wasn’t an altruistic thing. Studios make movies to make money, and filmmakers try to make something that will entertain an audience while trying to make money for the studio.

What made the original Ghostbusters special is that it was an original project by Dan Aykroyd who loved the paranormal. He wanted to put his friends in a movie. Though I wouldn’t say that was “altruistic,” I would say the film is genuine, and that’s something that Hollywood is missing lately. In other words, PLEASE, FOR THE LOVE OF GOD, STOP REBOOTING THINGS THAT DON’T NEED REBOOTING. Y’ALL ARE CREATIVE. USE YOUR CREATIVITY TO CREATE ORIGINAL CONTENT.

Actress Leslie Jones adds: “…When we did this reboot, I thought “Ghostbusters” fans would be so excited: “They’ve got the new technology — the ghosts are going to look real now.” These kids are not going to get the jokes that Bill and Dan told. There has to be a new story.”

I have to respectfully disagree with Jones’ sentiments. As a child, I didn’t get all the jokes in Ghostbusters, but that is what made it special. When I watched it as an adult, I was like, “Holy wow…this movie is even funnier than when I was a kid!” Ghostbusters is one of those rare films that is timeless, both in story and in humor, and arguably one that never needs to be rebooted — crap-tastic special effects and all.

Though the creators and stars of the Ghostbusters have been subjected to rampant and disgusting sexism, and as mentioned in the New York Times article, have had to unfairly defend their film against such trolls, there is a frustration fans have that is independent of such misogyny — a frustration rooted in A.) Hollywood’s desire to continually reboot and franchise films; and B.) The specific reboot of this cherished film, regardless of the gender of the lead roles. And as seen from the the New York Times article, this is something lost upon the new creators — or they’ve had to find the best way to defend why they remade the film.

All four actresses in the new Ghostbusters are supremely and uniquely gifted; however, I wish they didn’t have to be in formulaic or franchised Hollywood fare. I’d love to see them in more original films because they are all original talent. Having four women as the leads in a film is a huge step forward, but is it a step forward if the film is cookie-cutter Hollywood franchised, reboot, remade fodder with cheesy jokes and overt self-awareness? As a woman who has worked in Hollywood and who now works in independent cinema, I’m tired of seeing women thrown scraps and us being told we have to celebrate it as feminism. These women are so much more than the female equivalent of Bill Murray, Dan Aykroyd, Harold Ramis and Ernie Hudson.

I must admit that like many people commenting on this film, I have not seen it. These thoughts are based on the two trailers I’ve seen, and the numerous articles I’ve read about the project. I hope my concerns will be invalid and the film will feel fresh and fun and showcase the leads’ individual talents, not only because I love the original Ghostbusters — I love these four ladies.